Elizabeth May, MP from Vancouver Island and leader of the Green Party,

I recently added MP Elizabeth May to my petition on Change.org, asking Prime Minister Trudeau to stop the sale of armed vehicles to Saudi Arabia. The following letter from MP May is in response to that petition, which would have been emailed to her each time the petition was signed. I want to thank MP May for her supportive reply, and acknowledging the sale of arms is a matter of ethics and defending human rights.

“Thank you for copying me in your email to the Prime Minister. I wholeheartedly agree that Canada must deny Saudi Arabia further arms, given their history of violating the human rights of their people. 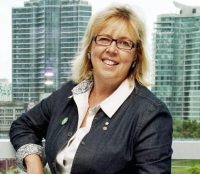 Elizabeth May, O.C., M.P., Leader of the Green Party of Canada.

“I am appalled that the new government has refused to overturn the deal. This agreement places profiteering ahead of human rights and tarnishes Canada’s international reputation.

“Federal export controls forbid the sale of arms to any country with a “persistent record of serious violations against the human rights of their citizens.” The previous government refused to confirm whether the agreement complies with this rule, or whether it received assurances that Canadian arms will not be used by Saudi Arabia against their people.

“I recently called on Parliament to impose an arms embargo against Saudi Arabia. Saudi Arabia is very likely using Canadian-made combat vehicles in Yemen. Saudi involvement in Yemen has been widely condemned for violating international law and for plunging Yemen into a humanitarian disaster. In February, UN Secretary-General Ban Ki-moon spoke out against the Saudi-led coalition, whose air strikes are hitting hospitals, schools, and mosques in Yemen.

“Canada cannot allow economic and political ties to any nation prevent us from speaking out against human rights abuses. Canada must act to sign and ratify the UN Arms Trade Treaty putting restrictions on the conventional arms trade, as the Prime Minister promised he would.

“Thank you again for writing.

Sincerely, Elizabeth May, O.C., M.P.
Member of Parliament for Saanich-Gulf Islands
Leader of the Green Party of Canada”