In the second episode of its new season, Vice takes on no small task in covering the premier humanitarian issue of today: the Syrian refugee crisis, the largest refugee migration since World War II.

Following the refugees on their journey, Vice sets out to cover not only the trials of those seeking asylum from the Syrian conflict, but the reactions from the Western world and the countries that have sought to take them in.

Unfortunately, but perhaps not surprisingly, the response in many regions has been oppositional, especially in the aftermath of the Paris ISIS attacks. In addressing this modern world crisis, Vice depicts the severe trials and tribulations faced by the desperate refugees, and the consequences, noticed or unnoticed, of turning them away.

Watch VICE TV – Escape to Europe and Cycle of Terror in our Documentaries section.

The episode’s first half, hosted by Vice correspondent, Ahmed Shihab-Eldin, discusses the plight of the 4.5 million refugees who have fled the ongoing conflict in Syria, hoping for safe haven in Europe, by tracing the steps taken by the migrants themselves.

The first step, for most, is crossing the Turkey-Syrian border. Once in Turkey, however, the next step is not always clear.

Interviewing one of the families, Shihab-Eldin shows just how desperate a situation the refugees find themselves in, particularly in the town of Tel Abyad, formerly controlled by ISIS, and now a stronghold for the People’s Protection Units in their fight against the terrorist group. 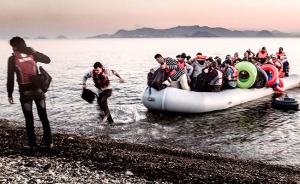 “There was constant shelling and fighting in Syria,” says the mother of the family. “We were forced to get down on the ground because there were snipers. You could die at any moment.”

Another mother explains the agony of waiting to go home, or to move forward, and the purgatorial waiting period in the Suruc refugee camp, the largest refugee camp in Turkey.

“We’ve been here for ten months,” she says. “We don’t have any money left.”

“My sons have an illness,” indicating her children’s foot fungus, “I took them to the hospital and they did not accept us there. I swear, I die a thousand times every day.”

The desperation of families like these, and the increasingly dim prospect of returning home, is enough to make many refugees seek out the European Union, by taking the oversea journey to the nearest Greek Islands.

Following one refugee, Musa, on his journey to join his brother Ammar, in Greece, Vice shows just how desperate this decision is.

Not only do the refugees themselves have to drive the boat, but they are instructed to pop their boats upon seeing a Greek Coast guard. This way, they may be rescued and taken, by law, to the European Union. The journey itself is a gamble with infamously deadly consequences; more than 3700 people have drowned in the attempt.

Once in Greece, however, the refugees only find themselves in another state of purgatory, with the Greek economy being so bad as to fail to provide proper housing, medical care, or jobs.

This leaves the refugees in yet another desperate bid to move on, this time to Macedonia. In following refugees, the Vice team does an expert job of detailing the real plight of the refugee: the perpetual state of insecurity.

Once escaped from the violence of Syria, they often only find themselves in another state of desperation as governments are unable, or worse, unwilling, to provide for them.

A memorable part of the coverage involves many nations, once they’ve realized Germany is taking more refugees, shipping in mass their own refugees into the country. Once aboard the trains, however, they’re once again thrown into uncertainty.

“When you talk to some of these refugees, when you ask them questions, they’re often asking you as many questions as you’re asking them,” explains Shihab-Eldin, “because they don’t have any idea of where they’re going, or what they’re going to do when the get there.”

Watch VICE TV: Escape to Europe and Cycle of Terror in our Documentaries section.

The episode’s second half, hosted by correspondent Gianna Tobini, is appropriately titled “Cycle of Terror”, and focuses on the mechanisms at play in creating the widespread terrorist threats in the Middle East, including the western world’s part in the conflict. 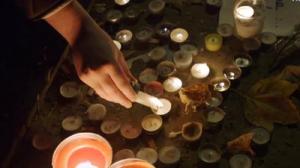 Especially in the wake of the Paris attacks, with suspicions that the terrorists entered the country posing as refugees, western countries, including the United States, have been increasingly opposed to granting refugees asylum. In turn, the Islamophobic responses from civilians and politicians in these countries only legitimize ISIS’ claims of the western war on Islam, thus encouraging threatened Muslims to join up. In the US alone, hate crimes and scare tactics against Muslims tripled in the months following the Paris attacks.

Tobini investigates by visiting Dallas, Texas, to follow a squad of armed citizens who have taken it upon themselves to “protect” their communities from Muslim threats.

This includes stationing themselves outside a mosque in Richardson in protest. The response from religious leaders in the community, Muslim, Jewish, and Christian, is one of outrage. Several speak of how such behavior echoes similar hate crimes against them in the past.

“When I hear a presidential candidate say it’s a good idea to register and label people,” says Elana Zelony, a local rabbi, “that has echoes for me of 1930s Germany.”

Michael Walters, a black pastor, details the threats made against his grandfather by the KKK:

“One night, he was visited by the Klan to his home. My grandfather invited the grand wizard in for coffee. He wanted them to know you can come to my home, but you’re not gonna cause me to run away.”

“Moments like these, you can’t remain silent. People are being challenged to determine what kind of history they’re going to stand on.”

Other interviewees include a former US Marine, who’s a practicing Muslim and a family of the Richardson Mosque, who’s wife and sons have been harassed at work and school.

“[I’d tell them to] just think before they do what they do and say what they say,” says one of the sons, who’s visibly shaken from the protest. “We’re not all bad.”

In conducting these interviews Vice effectively shows the impact of even the smallest, so-called “isolated” incident of racism or Islamophobia, as well as the effects of political rhetoric in stirring these acts. 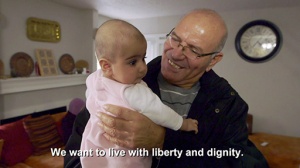 The segment’s biggest success is in providing a face to the people so easily dismissed in anti-Muslim and anti-immigrant political rhetoric, the true impact of which is never truly seen or considered by those speaking and embracing it. The heartbreaking footage of a child in fear is a stark reminder of the truly un-American act of making people feel unsafe in their own homes, even if supposedly done for a pro-American purpose.

Tobini emphasizes this point in interviewing Texas Congressman Michael McCaul, asking if denying sanctuary to the most vulnerable population in the world is not a betrayal of American ideals.

The segment acknowledges the high degree of security most of the Western world finds itself in, and how we will all need to “be on high alert for the foreseeable future”.

The ultimate question posed by this episode, then, is a timeless one: how may the countries of the world remain vigilant in the wake of a new global threat, while also maintaining the principles of equality and justice they’ve claimed as cornerstones of society?

When, for example, does the American responsibility to protect its citizens overshadow the American ideals of life and liberty?

As the war with ISIS escalates, it’s these kinds of questions that need to be asked again and again, to ensure our humanity, as well as our security, remain intact. In taking to the streets to see the very real, if often unseen, effects of heightened nationalism and security on minority citizens, Vice reminds viewers of the ways ISIS can hurt the world without firing a shot, but only if we let it.

Watch VICE TV: Escape to Europe and Cycle of Terror in our Documentaries section.

Watch rare interviews and news reports in our Documentaries section.