Humanity First is running two schools in Mafraq and Amman for Syrian refugee children. This is helping the refugees to get into the Jordanian education system, have a chance of getting a Baccalaureate and entering University. 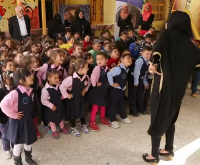 Humanity First writes: “For the younger children in Mafraq including many orphans, Humanity First is providing counselling to help them recover from the trauma of war.

“The conflict in Syria has now entered its fifth year, and yet there is still no end in sight. The scale of human suffering has surpassed even our worst estimates. Due to miserable living conditions and no safety nets available for survival, thousands of displaced Syrian refugees are using all means to migrate to European countries.

“On September 2, 2015, the world woke up to see pictures of the lifeless body of a 3-year-old boy, washed up ashore Turkey who was later identified as Aylan Kurdi. Aylan, his 5-year-old brother Galip and their mother, Rehan, were among at least 12 people who died on a boat headed for Greece. These children and their families would not have suffered this tragedy if they had hope for a brighter future for their families close to home.

“Humanity First has taken upon itself to sow the seeds of hope and make the land safer than the water for children and their families once again. We have been helping displaced families in Jordan and Turkey by providing them with means to settle down.

“The most prominent initiative of Humanity First has been operating two schools for Syrian refugee children in Jordan for the past one year. Mafraq School has 100 children enrolled between the ages of 5 and 10 years. Amman Senior School is being operated in collaboration with a local partner Al Gharaa Charitable Organisation. The school currently has enrolled 150 pupils aged between 17 and 20 years of which 27 students recently secured admission to Universities and Colleges.

“We could not save Aylan Kurdi and many others, but with your support we may save thousands of others impacted by Syrian Crisis and several other disasters around the world.”

Click here and visit Humanity First’s website, and read how you can get involved as a volunteer.