A woman falls into the water with her child as they disembark off a dinghi as refugees and migrants arrive at the Greek island of Lesbos after crossing the Aegean sea from Turkey, on 2 October 2015 (AFP)

Having fought (in) the wars that created these crises – Canada has systematically closed every possible avenue of access for refugees. This article is published in snippets.

When it comes to invading and bombing countries, Western countries are ready to spend billions. But when it comes to helping refugees flee from those same countries, they look away, their deep pockets having suddenly shrunk. 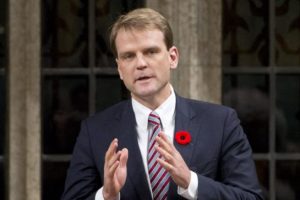 According to Immigration Minister Chris Alexander, a mere 2,300 Syrian refugees have resettled in Canada and the federal government has pledged to take another 10,000 by 2017 – Germany has welcomed that many in just one day.

Only 26 per cent of refugees have been government-sponsored, while private groups such as families, churches and community organisations have financially supported the rest.

Scott Gilmore, explains in his Maclean’s article, “Why Canada should take in 20 times more refugees,” that it wouldn’t cost much either.

According to Toronto refugee lawyers Geraldine Sadoway and Andrew Brouwer, “Quietly and systematically, in collaboration with European, Australian and US allies, Canada has been closing every possible avenue of access for refugees.

“By doing so, we drive them into the hands of smugglers who are reaping profits at the expense of the lives of desperate people.”

Canadian policy is also highly discriminatory, preferring to resettle Yazidi and Christian Syrians over Muslim Syrians, who form 85 per cent of the population.

The Harper government fear they might be welcoming Jihadi terrorists into the country. It’s an unfounded notion that only spreads fear among the public.

Canada’s actions abroad have been counterproductive to achieving peace.

Libya was once a prosperous oil exporting country with the highest living standard and life expectancy in Africa. Today, it is a destroyed, failed state.

Human rights violations were widespread in Libya, but that is also the case for Saudi Arabia, a key Western ally.

All of this quickly changed with the West’s “humanitarian” bombing intervention in 2011, which NATO deemed as “one of the most successful in NATO history”.

In flagrant disregard of UN Resolution 1970, which implemented an arms embargo, countries such as the US, UK, Canada and France armed the rebels with weapons.

Canada supplied the rebels with drones to gather intelligence and Canadian forces were on the ground, violating UN Resolution 1973 that forbid foreign occupation of any form in Libya.

When Gaddafi was tortured and killed by a mob in November 2011, and his body was dragged through the streets, war supporters celebrated, praising the West’s mission as a successful model to follow for future interventions. Shortly after, Libya quickly descended into devastating anarchy; various militias currently compete for authority and the economy is in shambles.

“It was the actions taken against Mr Gaddafi that totally undermined security in Libya and opened the floodgates of refugees,” Jacob Zuma, president of South Africa said last month addressing diplomats in Pretoria.

“They don’t want to accept the refugees,” Zuma said referring to European countries involved in the mission.  “It is their responsibility. They caused it, they must address it.”

3,000 refugees have died this year trying to reach Europe. These foreign interventions under the guise of “spreading democracy” and “liberating the people” have only brought more war and chaos.

2014 was the deadliest on record for Afghan civilians, according to a UN report that documented 3,699 civilian deaths, with 72 per cent attributed to insurgents. After more than a decade of war, the civilian death toll is 18,000.

Groups such as ISIS and al-Qaeda didn’t exist before the West’s invasion.

For years al-Qaeda was the terrorist target. But now the situation has become so bizarre that David Petraeus, the former head of the CIA, has called on al-Qaeda to help fight ISIS.

Yet in an interview with Al Jazeera, Hamid Karzai, the former president of Afghanistan, admitted that al-Qaeda did not exist.

Which group is winning the war is irrelevant. For the West, it’s important to keep the war machine going – divide, conquer and collect the profit.

It’s why Canada has also been supplying military hardware to Saudi Arabia, a well-known violator of human rights and long-time suspect of funding ISIS.

Decades of violent Western intervention in the Middle East and Africa have done its part.  Instead of launching airstrikes in Iraq and Syria, which are killing innocent civilians,

Canada and the West should try everything they can to resettle refugees fleeing from the chaos they created themselves.

Below is a link to the full article.
Middle East Eye: Canada is Complicit in the Refugee Crisis