On Friday, Japanese leader Shinzo Abe will make a speech marking the 70th anniversary of the end of World War Two. Much attention will be on the words he uses, but if the term “sorry” is uttered, it will not be for the first time, reports Robert Dujarric.

Japanese leaders have apologised countless times for the exactions of Imperial Japan.

Besides statements by former Prime Ministers Maruyama and Koizumi, Chief Cabinet Secretary Kono, as well as expressions of regrets from the emperor, Japan has paid formal and informal reparations to numerous victims of Japanese aggression.

Yet, the perceived wisdom in many quarters is that Japan has not shown any contrition for the deeds of its empire. These criticisms are always followed by: “Germany, however, has faced its Nazi past honestly, unlike Japan.”

There are several reasons for this state of affairs. 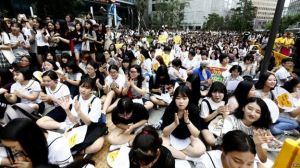 Anti-Japanese sentiment in South Korea has manifested itself in recent protests.

Firstly, many Japanese apologies have looked like “one step forward, one step backward“.

Senior politicians, including prime ministers, visit the Yasukuni Shrine, where Class A war criminals are sanctified. Some members of the ruling Liberal Democratic Party (including Prime Minister Abe when he was in the opposition) claim that there was no sexual slavery or consort with individuals who refer to the “so-called Nanjing Massacre”.

Thus, official Japan lacks “message discipline,” a critical skill in the internet age, where even second-rate politicians can get heard worldwide at the speed of light.

Secondly, by world standards, Japan has done a lot of apologising. It is obviously way ahead of the Chinese Communist Party, whose policies sent tens of millions of Chinese to their deaths, and of Vladimir Putin, who calls the demise of the equally genocidal Soviet Union a tragedy.

But, even compared to Western Europe, when it comes to colonial killings – or the American republics and Australia regarding slavery and the destruction of native societies – Japan is probably above average in the realm of apologies. But Imperial Japan will always be compared to Nazi Germany, its Axis ally. And, by German standards, Japanese atonement is clearly wanting, whether it be in the scope of statements regarding the past, the behaviour of the political establishment, textbooks, museums, and financial compensation.

Whether he likes it or not, Prime Minister Shinzo Abe is being judged by Willy Brant’s standards, not by Xi Jinping’s.

To read the rest of this article by Robert Dujarric click on the link below.

BBC News: Viewpoint: Japan’s ‘sorry’ seems to be the hardest word to remember.