The Law Society of Upper Canada’s selection of the imprisoned Saudi human rights lawyer Waleed Abu al-Khair for its 2016 Human Rights Award highlights Saudi Arabia’s brutal repression of peaceful activists and dissidents, Human Rights Watch said today. Saudi authorities should immediately and unconditionally release Abu al-Khair, who was sentenced in 2014 to 15 years in prison for his peaceful human rights advocacy, so that he can attend the award ceremony in Toronto on February 22, 2017.

Saudi courts have convicted at least 20 prominent peaceful activists and dissidents since 2011. Many, like Abu al-Khair, have faced sentences as long as 10 or 15 years on broad, catch-all charges – such as “breaking allegiance with the ruler” or “participating in protests” – that do not constitute recognizable crimes. 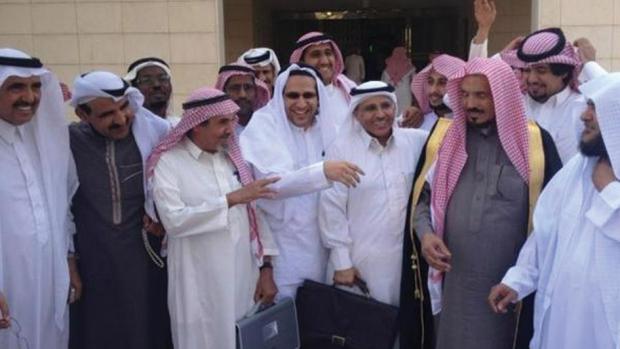 Abu al-Khair has been one of Saudi Arabia’s leading human rights advocates for years. In July 2014, the Specialized Criminal Court (SCC), Saudi Arabia’s terrorism tribunal, convicted him on a number of broad and vaguely worded charges, including for comments to news outlets and on Twitter criticizing Saudi human rights violations. In addition to sentencing him to prison, the court banned him from traveling abroad for another 15 years and fined him 200,000 Saudi riyals (US $53,000).

Abu al-Khair played no active part in his trial. He refused to recognize the legitimacy of the court or to defend himself. He also refused to sign a copy of the trial judgment or to appeal either his conviction or sentence. In January 2015, an appeals tribunal within the SCC overturned part of the earlier ruling following a prosecution appeal of the court’s suspension of five years of his term, and ruled instead that Abu al-Khair should serve all 15 years in prison.

In addition to the Law Society of Upper Canada’s 2016 Human Rights Award, Abu al-Khair received the prestigious Olof Palme Prize in 2012, and the Ludovic Trarieux International Human Rights Prize in 2015, in recognition of his human rights work.

Saudi authorities regularly pursue charges against human rights activists based on their peaceful exercise of freedom of expression, in violation of international human rights obligations.

Saudi authorities arrested activists Issa al-Nukheifi and Essam Koshak in December 2016 and January 2017 respectively, and they may face trial. Others, including Abdulaziz al-Shubaily and Issa al-Hamid, are free while appealing long sentences the SCC handed down in 2016. Mohammed al-Oteibi and Abdullah Attawi are currently on trial for forming a human rights organization in 2013.

“Saudi Arabia repeatedly demonstrates its complete intolerance toward citizens who speak out for human rights and reform,” Whitson said.  [01]