Jannatul-Baqi before and after the Saudi occupation and destruction of the holy ground.

Genocide and iconoclasm – the war tactics the Saudi “royals” are infamous for using in their campaigns to spread Wahhabism, Saudi Arabia’s strictly enforced state religion. Since Wahhabism first rose its violent head in the desert of Nejd in the Hijaz, in the 18th century Islam, Christianity, Judaism and all other religious denominations have suffered a veritable cultural genocide at the hands of the al-Saud royal regime. [01]

Update 08/09/2016: A communication from OFFICE OF THE HIGH COMMISSIONER FOR HUMAN RIGHTS; part of a special report released on July 3rd (2016) by, on the “destruction of various Mosques and sites of religious, historical and cultural importance in Saudi Arabia.”

You can read the full communication on a pdf document. Below is an informational video produced by Al-Baqee Organization.

On July 13 (2016), in defense of their culture’s historical structures, the Baqee Organization took to the streets of the US capital, Washington, DC, and denounced the Saudi’s destruction of Islam’s holy sites.

According to the Baqee Organization over “7,000 Islamic sites have been destroyed to assuage Wahhabis’ own sense of self-righteous bigotry, still the world has sat in silence. Firmly anchored in intolerance for they think their ideology holy, and pure, Wahhabi clerics have rationalized religious oppression and brutality, turning it into a well-honed system.”

The Organization says “Amid the many crimes which were committed over the years one has towered over all as it spoke of a hate so entrenched in itself it could never be defined other than in ideological absolutism.

“In 1925, Al-Saud regime took its wrath on al Baqee cemetery, where some of Islam’s most noble personalities, including members of the Prophet Muhammad’s family, are buried.  As it lies in ruins, al Baqee came to represent Resistance – the call of a people against the injustice of radicalism, the need for a people to reclaim its History so that cultural and religious identity would not be lost.

“Wahhabism has claimed many holy sites over the centuries — Gautama Buddha statues in Afghanistan, the Temple of Palmyra in Syria and the Tomb of Prophet Jonah in Iraq. Before Wahhabism, the world stands to see its memory erased. It is this violence, this insane pursuit for religious absolutism which the Baqee Organization ambitions to denounce, and oppose so that justice could be reclaimed.

“Muslims and non-Muslims – beyond creed, ethnicity, and political persuasions, people from across the United States will stand in solidarity with the embattled citizens of Saudi Arabia and the countries it oppresses. Similar protests have been scheduled at Saudi Arabian Consulates and Embassies in Los Angeles.

“In the face of tyranny, we are all minorities. It is how we face injustice which truly defines our character.”

Jannatul-Baqi before the Saudi occupation and destruction of the holy ground. In the year 1806, the radicalized Wahhabi militia, at Abdul Aziz ibn Saud’s command, entered Madina, where they razed to the ground every mosque they came across, including desecration of the holy burial grounds of Al-Baqi, where the domes and markers of great Islamic personalities and holy persons were flattened into an anonymous field, leaving no sign of a single grave or tomb.. 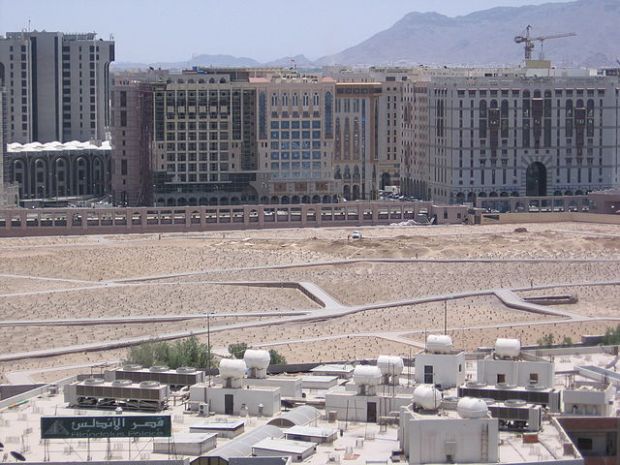 Today there is no sign of the Jannatul-Baqi holy cemetery. His infamous use of iconoclasm and religious tyranny was all part of King Abdul Aziz ibn Saud’s quest to “re-envision” the holy cities with an infrastructure that would support his Wahhabi interpretation of Islamic belief, which also conveniently helped secure the Al-Saud family’s position as kings and royal rulers of the realm.

The Baqee Organization is a coalition of American-Muslims citizens committed to raise awareness on the brutal atrocities and attacks carried out by Wahhabism against Muslims, Islam and Islamic Heritage sites.

“As Shia Muslims we have devoted our time and energy to denouncing tyranny and injustice. We ambition to organize all Muslims – across all school of thoughts, and all Muslim organizations throughout the North American continent to better raise awareness and educate against the dangers of radicalism.

Our world History is being pillaged, our past raided … Silence is no longer an option!

Our stand starts at al Baqee cemetery as it is there that Islam was most brutally violated – its ground desecrated.

As Shia Muslims we will continue to speak for, and on behalf of Islam’s most brilliant tradition. We will hold true to Islam’s principles of free speech, freedom of religion, and defence of the oppressed.

To be the central organization in rebuilding Jannat-al-Baqee in Medinah, Saudi Arabia. To co-ordinate with other Muslims and Muslim Organizations to help, assist, protect and raise awareness in preventing further destruction of all Muslim Holy sites, mosques and to focus on Rebuilding the destroyed Holy Muslim sites.

You can visit their website, and support the cause of preserving history.

We welcome comments and conversation. Scroll down page to use the comment box.