UPDATE July 15th: The truck driver killed by police after mowing down dozens of revelers in the French seaside city of Nice had a “violent” past, but he was not previously the subject of a terrorism investigation, French prosecutors said today.

Officials at a news conference described what they knew about the suspect while confirming that at least 84 people were killed — including 10 children — while 202 others were wounded. Of the 52 people in critical condition, 25 remained on life support, said French prosecutor Francois Molins.

French President Francois Hollande earlier said that those in critical condition were “between life and death.”

The 31-year-old driver, Mohamed Lahouaiej Bouhlel, had been detained in March and convicted of voluntary violence with a weapon, although the details of his arrest were not immediately released.

Prosecutors said he was also known to police “due to threats, violence and petty theft” between 2010 and 2016.

But it was unclear whether Bouhlel, a Tunisian-born delivery man and married father living in Nice, had any ties to terrorist groups. [01] (End update).

President Hollande said a further 10,000 military officers will be deployed around the country, with many set to be deployed to help the situation in Nice.

He continued: “I have instructed all regional hospitals to be prepared to deal with an influx of injured. We saw similar attacks in Paris last year and now Nice.”

President Hollande (right), confirmed that many of the dead are children.

He used the speech to confirm that France would pay “close attention to tightening borders” and will show “show real military force in Syria and Iraq”. [02] (End Update).

The southern French city of Nice suffered a terrorist attack tonight, as the shooter drove a large semi-truck into a crowd, and began shooting as people were celebrating Bastille Day

At least 74 people are dead according to the French newspaper Nice Matin, with another 42 fighting for their lives in a critical condition in hospital. More than a hundred more people are believed to have been injured. 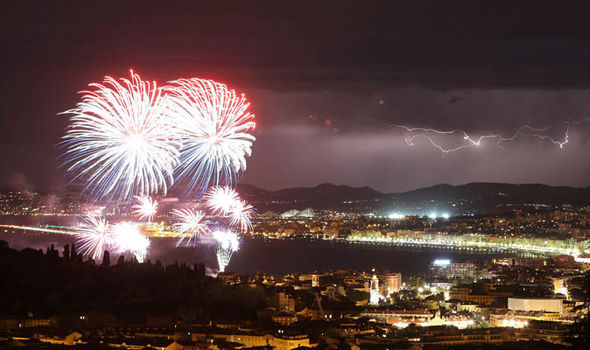 French officials have confirmed that they are investigasting a terrorist attack and there are reports that there are gunmen on the loose in the city. French TV channel iTele tonight reported that a gunman believed to be one of two terrorists had “holed up in a nice restaurant downtown” but was then “neutralized” by police. 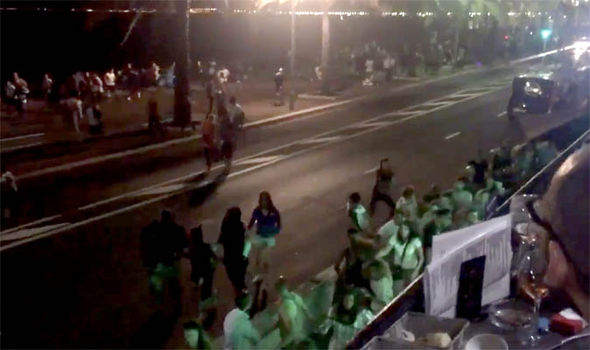 The channel said it is not believed the man had taken any hostages during the incident. The man is believed to have been in the lorry with the driver and fled on foot to a restaurant called Le Buffalo nearby, where he was killed by an officer with a handgun.

On the promenade it is thought that police officers desperately fired on the truck as it was “deliberately driven” for more than 100 metres at people leaving a major bank holiday fireworks celebration.

Witnesses said the truck picked up speed and “rammed” the crowd where it was thickest at more than 40mph whilst the driver fired a gun out of the window. Images then emerged of the cab riddled with bullets.

One eyewitness said he saw the driver emerge with a gun after the truck came to a halt and begin shooting at the fleeing crowd.

French newspaper Le Figaro quoted police sources saying that officers found weapons, guns and grenades inside the lorry cab, indicating it was a premeditated terrorist attack. Police are now actively seeking out any accomplices involved in planning the atrocity and specialist anti-terror detectives from Paris have taken over the investigation from local officers.

Crowds had packed out the city’s main promenade to watch a fireworks display marking Bastille Day, a major public holiday in France, and were beginning to head home when the lorry hit.

One witness reported horrific scenes with “dead bodies everywhere” and distressing video footage emerged of people fleeing the Promenade des Anglais, in the southern French city, in terror. Another said it ran down terrified pedestrians “like ninepins”.

Nobody has yet claimed responsibility for the attack but supporters of the DAESH militia group have been celebrating it on social media. It is believed to be the 10th terrorist attack carried out in France since January last year.

A reporter for the Nice Matin newspaper who was covering the celebrations added: “There are people in blood, probably full of wounded.”

Fabien Lallemand said he saw a “huge white truck traveling at breakneck speed” which clearly intended to “mow down the maximum number of people”.

He said: ”I saw bodies flying like bowling pins in its path. I heard noises, screams, that I will never forget. I was paralysed. I did not move.

“Around me, there was panic. people were running, screaming, crying. Then I realized. And I ran with them.”

One eyewitness, Wassim Bouhlel, said he saw the driver emerge from the truck after it came to a halt and start shooting at the crowds.

He said: “There was carnage on the road. Bodies everywhere.“

Police have identified the driver, who was killed during the incident, and it is believed to have been a man who was known to security services. Separate reports emerged tonight that police fear four different trucks are involved, raising fears of a massive organised terror attack.

Christian Estrosi, a leading regional politician in the area, said on Twitter: “This is the worst drama in the history of Nice with more than 70 victims already.“

And pictures posted on social media, far too graphic to publish, showed bodies strewn across the road in a scene of total devastation. The world-famous promenade, next to Nice’s stunning sandy beach, is one of France’s top tourist spots.