Today, Canada is hosting the North American Leaders’ Summit in Ottawa, in order to take coordinated action that will create sustainable economic growth, help transition to a low carbon economy, and provide better opportunities for Canadians, Americans, and Mexicans alike.

“Better collaboration, better partnerships are a path to prosperity,” Canada’s Prime Minister, Justin Trudeau said Tuesday. “And that’s a compelling example that we want to showcase at a time where, unfortunately, people are prone to turning inwards which will unfortunately be at the cost of economic growth and their own success.” 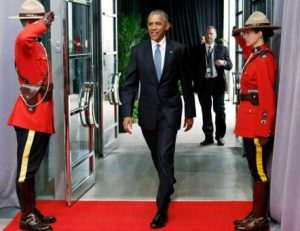 The leaders of the United States, Canada and Mexico convened a summit Wednesday intended to reaffirm their close cooperation on security, the environment and trade at a time of rising extremist threats around the globe and isolationist calls in the American presidential campaign.

President Barack Obama met with Canadian Prime Minister Justin Trudeau and Mexican President Enrique Peña Nieto at the North American Leaders’ Summit. Obama planned to address the Canadian Parliament — the ninth American leader to do so and the first since Bill Clinton in 1995. [01]

During the Summit, the Prime Minister of Canada, Justin Trudeau, the President of the United States, Barack Obama, and the President of Mexico, Enrique Peña Nieto, will discuss the opportunity for North America to become the world’s most competitive player in the clean growth economy – and the potential to create the jobs of today and tomorrow.

The three leaders will also talk about ways to advance trade and competitiveness, because an efficient North American economy is vital for prosperity and for creating good-paying, middle class jobs.

Above all, today’s Summit is an opportunity for three great nations – who share the same continent and the same values – to stand side-by-side and deliver real results for North Americans, and the entire global community.

“Today, the leaders of Canada, the United States, and Mexico come together to address shared challenges, knowing cooperation pays off, and that working in partnership always beats going it alone. The outcome of today’s discussions will improve the lives of Canadians, Americans, and Mexicans across the continent. We will streamline the flow of legitimate goods and trusted travelers across our borders, promote cleaner air and waterways, and work toward a competitive, low-carbon, and sustainable North American economy that creates good, middle-class jobs for our citizens,” said Prime Minister Trudeau.

The Following is the Prime Minister Office’s official Leaders’ Statement on a North American Climate, Clean Energy, and Environment Partnership on June 29, 2016, from Ottawa, Ontario, Canada:

The Paris Agreement was a turning point for our planet, representing unprecedented accord on the urgent need to take action to combat climate change through innovation and deployment of low-carbon solutions. North America has the capacity, resources and the moral imperative to show strong leadership building on the Paris Agreement and promoting its early entry into force.

We recognize that our highly integrated economies and energy systems afford a tremendous opportunity to harness growth in our continuing transition to a clean energy economy. Our actions to align climate and energy policies will protect human health and help level the playing field for our businesses, households, and workers. In recognition of our close ties and shared vision, we commit today to an ambitious and enduring North American Climate, Clean Energy, and Environment Partnership that sets us firmly on the path to a more sustainable future.

We announce a historic goal for North America to strive to achieve 50 percent clean power generation by 2025. We will accomplish this goal through clean energy development and deployment, clean energy innovation and energy efficiency. Building from ongoing efforts by our respective energy ministers through the North American Energy Ministerial Memorandum Concerning Climate Change and Energy Collaboration, a range of initiatives will support this goal, including:

Together, we estimate that the development of current and future projects and policies to achieve this goal will create thousands of clean jobs and support of our vision for a clean growth economy.

The three countries will continue to strengthen the North American Cooperation on Energy Information platform, by including additional geospatial information relating to cross-border infrastructure and renewable energy resources. We also commit to deepened electric reliability cooperation to strengthen the security and resilience of an increasingly integrated North American electricity grid.

Short-lived climate pollutants such as methane, black carbon, and hydrofluorocarbons are up to thousands of times more potent than carbon dioxide. Common sense actions to reduce these pollutants will deliver significant climate and health benefits in the near term and into the future, supporting our goal to limit global warming this century.

Today, Mexico will join Canada and the United States in committing to reduce their methane emissions from the oil and gas sector – the world’s largest methane source – 40% to 45% by 2025 towards achieving the greenhouse gas targets in our nationally determined contributions. To achieve this goal, the three countries commit to develop and implement federal regulations to reduce emissions from existing and new sources in the oil and gas sector as soon as possible.  We also commit to develop and implement national methane reduction strategies for key sectors such as oil and gas, agriculture, and waste management, including food waste.

Finally, we pledge to continue collaborating with one another and with international partners as we commit to significant national actions to reduce black carbon emissions in North America, and promote alternatives to highly polluting hydrofluorocarbons.

We recognize that fully realizing the promise of an integrated North American transportation network will require joint action that will create clean jobs while reducing energy consumption, greenhouse gases, and air pollution.

Today, we commit to:

Canada, the U.S., and Mexico commit to reduce GHG emissions from light- and heavy-duty vehicles by aligning fuel efficiency and/or GHG emission standards by 2025 and 2027, respectively. We also commit to reduce air pollutant emissions by aligning air pollutant emission standards for light- and heavy-duty vehicles and corresponding low-sulphur fuel standards beginning in 2018. In addition, we will encourage greener freight transportation throughout North America by expanding the SmartWay program to Mexico.

We recognize the significant contributions of our respective automotive industries and urge them to continue playing a leadership role in the development and deployment of clean and connected vehicles, innovating toward a shared vision of a green transportation future.

We support the adoption by all countries in 2016 of the market-based measure proposed through the International Civil Aviation Organization to allow for carbon-neutral growth from international civil aviation from 2020 onwards and will join the first phase of the measure adopted.

We are committed to reducing greenhouse gas emissions from maritime shipping and will continue to work together and through the International Maritime Organization (IMO) to support implementation of a North American Emission Control Area that includes Mexico.

The mainstreaming of conservation and sustainable biodiversity is a key component of sustainable development. Canada and the U.S. congratulate Mexico on its commitment to host the 13th Conference of Parties to the Convention on Biodiversity under this theme. We will also work together to better integrate ocean observation systems, enhance early warning systems for natural disasters, and cooperate on marine protected areas.

We reaffirm our commitment to work collaboratively to achieve our long term goal of conserving North America’s Monarch migratory phenomena and to ensure that sufficient habitat is available to support the 2020 target for the eastern Monarch population.  Trilateral efforts to date have achieved significant successes across the range, including the restoration and enhancement of hundreds of thousands of acres of habitat.  We look forward to continued progress and action in the future, building on the population increase for eastern Monarchs observed in 2015.

We commit to collaborating with Indigenous communities and leaders to incorporate traditional knowledge in decision-making, including in natural resource management, where appropriate, and in advancing our understanding of climate change and climate resilience. We also recognize the importance of gender-responsive approach to  climate action and sustainable development.

Canada, the U.S., and Mexico will work together to implement the historic Paris Agreement, supporting our goal to limit temperature rise this century to well below 2oC, and pursuing efforts to limit the temperature increase to 1.5oC. We reaffirm our commitment to join the Agreement this year, and call on all nations to support its entry into force in 2016. As we implement our respective Nationally-Determined Contributions, we will cooperate on climate mitigation and adaptation, focussing in particular on highly integrated sectors, shared ecosystems, human health and disaster risk-reduction efforts. We will work together and with international partners to support developing country partners in their mitigation and adaptation efforts. We will also support robust implementation of the Paris Agreement’s transparency and carbon markets-related provisions, and will develop mid-century, long-term low-greenhouse gas emissions development strategies this year.

Canada, the U.S., and Mexico affirm our commitments to adopt an ambitious and comprehensive Montreal Protocol hydrofluorocarbons (HFCs) phase-down amendment in 2016, and to reduce use of HFCs, including through domestic actions. We call on all nations to support this goal.

We commit to phase out inefficient fossil fuel subsidies by 2025 and call on the other members of the G-20 to do the same. We also urge the G-20 to make commitments to reduce methane emissions in the oil and gas sector and to improve the environmental performance of heavy-duty vehicles.

Canada, the U.S., and Mexico will promote universal energy access and work together to address the challenges of energy security and integration, clean energy investment, and regional energy cooperation in the Caribbean and Central America.

Canada, the U.S. and Mexico will align approaches to account for the social cost of carbon and other greenhouse gas emissions when assessing the benefits of emissions-reducing policy measures.

The Action Plan that supports this Joint Statement further elaborates the various activities that the three countries are undertaking to meet its commitments.

The North American Climate, Clean Energy, and Environment Partnership was announced by Prime Minister Justin Trudeau, President Barack Obama, and President Enrique Peña Nieto on June 29, 2016, at the North American Leaders Summit in Ottawa, Canada. This Action Plan identifies the deliverables to be achieved and activities to be pursued by the three countries as part of this enduring Partnership.

Advance clean energy and integration of energy resources, including renewables:

Strengthen the reliability, resilience and security of the North American Electricity Grid:

Reduce methane emissions in the oil and gas sector:

Develop national methane strategies with a focus on key sectors:

Decrease methane emissions from landfills and the agriculture sector:

Mainstream conservation and sustainable use of biodiversity:

Conserve the Monarch butterfly and its habitat:

Protect migratory birds and their habitat:

Protect land and sea migratory species and their habitat:

Support implementation of the Paris Agreement:

Encourage robust action by the G-20:

Promote a just transition to a clean energy economy: