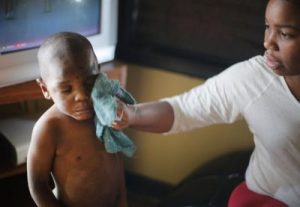 Ariana Hawk is the mother of three children under the age of ten living in Flint. She says her son is suffering from breakouts all over his body due to the contaminated water. Jan. 13, 2016. (Photo: Detroit Free Press/ ZUMA Wire).

What happened to the water supply in Flint?

The state of Michigan switched Flint’s water supply in 2011 from Lake Huron to the notoriously filthy Flint River. The Michigan Department of Environmental Quality failed to treat the corrosive water, and it ate into the city’s iron and lead pipes and leached into the drinking water. People got sick. They complained of skin lesions, memory loss and depression, and expressed concerns about Legionnaire’s disease, miscarriage and stunted childhood development.

Part One: Flint Water Crisis. The water crisis in Flint, Michigan horrified the nation. A once-thriving industrial city had fallen on such hard times that residents couldn’t trust the water from their own taps. VICE: Ahmed Shihab-Eldin reports from Flint on the realities of life in a city poisoned by its own government.

Part Two: Libya on the Brink. When the Libyan dictator Muammar Gaddafi was killed during the 2011 revolution, it seemed like good news for democracy in the Muslim world. VICE: Simon Ostrovsky reports from the front lines, where rival militias fight to save Libya as we know it. 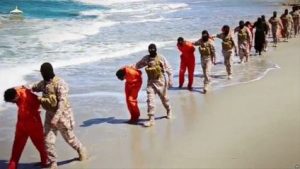 This undated image made from video released by Islamic State militants April 19, 2015, purports to show a group of captured Ethiopian Christians taken to a beach before being executed. (Photo: Reuters).

In 2012, the American ambassador and three other Americans were killed in a bloody attack in Benghazi, and today, a split between government factions has ceded large portions of the country to ISIS fighters and other extremists.

“In today’s Libya the rule of the gun has taken hold. Armed groups and militias are running amok, launching indiscriminate attacks in civilian areas and committing widespread abuses, including war crimes, with complete impunity,” Deputy Director for the Middle East and North Africa Hassiba Hadj Sahraoui said in a statement. [01]

All sides in Libya’s conflict are committing breaches of international law that may amount to war crimes, including abductions, torture and the killing of civilians, said the United Nations in November 2015. [02]