The Canadian Prime Minister, Justin Trudeau today issued a statement on the International Day of United Nations Peacekeepers. However, his words ring hollow for me, ever since he and his cabinet made a deal with the devil (House of Saud), I feel as though our new Prime Minister has sold Canada’s soul for fifteen ($15) billion dollars.

“Today, we salute United Nations peacekeepers, past and present, who have dedicated their lives to the pursuit of peace, safety, and freedom for others. They have greatly sacrificed to provide hope and security for the most vulnerable persons around the globe.

“Peacekeeping has a deep connection to Canadian values and leadership. The first UN peacekeeping mission came about in large part due to the efforts of Lester B. Pearson, our fourteenth Prime Minister, and the leadership of UN Forces Commander E.L.M. “Tommy” Burns. Together, their actions during the Suez Crisis of 1956 marked the beginning of Canada’s identity as a peacekeeping country.

“Since then, UN peace operations have evolved from separating belligerents and monitoring cease fires to protecting vulnerable populations and working to establish the conditions for durable peace. As conflicts have grown in intensity and complexity, so too have the risks for UN peacekeepers who put their lives on the line for the safety of others.

“On behalf of all Canadians, I commend UN peacekeepers for their selfless work and tremendous contributions to the advancement of global peace and human rights. We will continue working with the UN to promote peace and the resolution of serious conflicts around the world,” said Prime Minister Justin Trudeau in his press statement.

Back To You Alistair

Personally – I have lost a great deal of respect for Prime Minister Trudeau, starting the minute I read that his government signed the deal to sell armed vehicles to Saudi Arabia. Later that day I watched Trudeau on television defending his decision – and as a proud Canadian I felt betrayed. I also felt a sharp spear had been pushed thru my heart – it was not cupid’s arrow – it was Satan’s pitchfork – welcoming me into the club of countries selling weapons to aid in the Saudi’s self-evident war crimes in Yemen, and a lifetime of crimes against humanity inside their own country.

It is no surprise that Saudi Arabia cancelled their upcoming celebration here in Canada.

House of Saud Coat of Arms.

Last week Steven Chase wrote in The Globe and Mail: “Saudi Arabia says it’s postponing a celebration of Saudi culture planned for Canada’s capital this week, a move that comes as controversy persists over Ottawa’s $15-billion sale of combat vehicles to Riyadh and whether the deal might help the Mideast country perpetrate

“The May 18-21 festival appeared to be a Saudi charm offensive aimed at federal policy makers as the Trudeau government fields questions about its decision to grant export permits for the armoured vehicles to a country that U.S. watchdog Freedom House regularly ranks among “the worst of the worst” on human rights.

“The Saudi embassy blamed “logistical reasons” for its last-minute change of plans when contacted Monday and a spokesperson said the country’s decision was not motivated by fear of protesters. Foreign Affairs Minister Stéphane Dion’s office had already said he would not be attending the “Saudi Cultural Days in Canada.”

“The (Saudi) embassy was adamant the event “had nothing to do” with the $15-billion arms deal and said it had been planned for years.

Canada’s Department of Global Affairs, however, said it was notified of the “Cultural Days” on Jan. 14 (2016). That date was nearly two weeks after mass executions in Saudi Arabia drew public condemnation from the Trudeau government.”

“Polling suggests the vast majority of Canadians hold a dim view of the Saudi Arabian government, which is controlled by the ruling House of Saud. It has drawn major international condemnation for mass executions and for jailing and flogging atheists.” [01]

Screenshot from video that filmed Saudi armed vehicles firing on a civilian neighbourhood.

A UN panel alleges the country has committed serious human-rights violations in a war it has waged in Yemen.

“The Globe and Mail recently published footage from Shia activists in al-Qatif showing Riyadh’s forces using armoured vehicles against civilians. The vehicles that were deployed are not Canadian-made, but they demonstrate the Saudis’ proclivity to use such machines against their people

Human Rights Watch, citing figures from local activists, estimated recently that more than 200 people from Shia-majority towns and villages in the Eastern Province have gone to trial for alleged protest-related crimes since 2011.

Adam Coogle, a Middle East researcher with Human Rights Watch, said the trials he has studied are appalling. 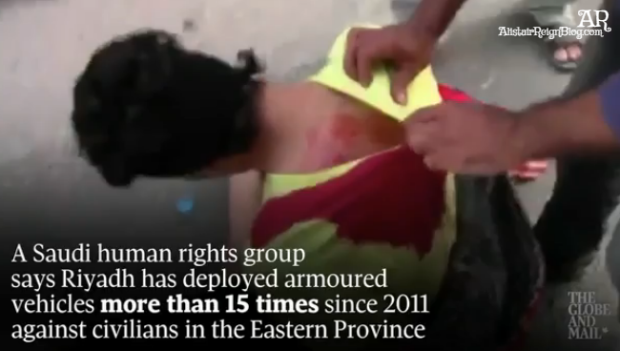 Screenshot from video showing the man above being shot by armed vehicles in Saudi Arabia.

“I’ve analyzed eight full Saudi trials of people who were involved in Eastern Province uprising and protest-related activities,” he said. “Every case I read, and the way the trial process occurred, was absolutely ludicrous. I mean it was a mockery of justice.

“In almost every single case, you had people who were ultimately convicted, and many of them sentenced to death, based solely on their confession that they [later] recanted in court and said they were tortured into giving,”said Mr. Coogle. [02]

If you agree that Prime Minister Trudeau should stop the export of the armed vehicles, please sign our petition on Change Org: Stop Canada’s Sale of Military Equipment to Saudi Arabia.

Send inquiries and requests for permission to re-blog article to Alistair.Reign@Gmail.com, thank you.