On February 18, 2016, “Just after 3:30 this morning, we attended tent city for a report of a serious assault. One man is in hospital with non-life threatening injuries. It’s early in the investigation and we continue to investigate what happened,” said Victoria Police spokesperson Cst. Matt Rutherford.

At that time, it was the third stabbing in tent city. In December, a man was injured in a knife attack. Police later caught the suspect. And in January, a man was taken to hospital with minor injuries. A couple days ago an apartment manager was attacked and mugged. [01]

Victoria police say an officer was injured Tuesday during an arrest at the city’s homeless camp.

VicPD says two officers assigned to keep order around the tent city attempted to arrest a woman on an outstanding warrant. The woman fled, officers chased her on foot, and the woman allegedly assaulted an officer during the arrest. [02]

I am not sure what some people constitute as “peaceful” but tent city is anything BUT Peaceful.

Squatter threatens those who disapprove. (Photo: Breaking the Code).

Many people are pointing a finger of shame at Victorians for wanting tent city taken down. I set out to visit tent city today, to look for families or single mothers with children. The Ministry of Housing and Social Services has been told there are approximately eight children living in the camp, but when workers have visited the camp in search of kids, they were unable to locate a single child on the premises.

Unfortunately, my plan was waylaid by concern for my safety. It was not safe for me to go into tent city today, because the other day two news reporters had been attacked and injured by a squatter. Their assault was recorded on film.

Instead, I scoured the internet for blogs and news sites, and gathered a variety of images that will speak for themselves – the gritty reality of tent city. Although, I could not find a single picture of children living inside the camp.

Photos show the progression of the squatters taking over what was once a grassy, public park with benches, enjoyed by local residents and people working in the area. That park I used to sit and eat my lunch on sunny days is gone – the property has been occupied by people from across Canada, and as far away as Europe to join, what I call the “Occupy Victoria” movement. 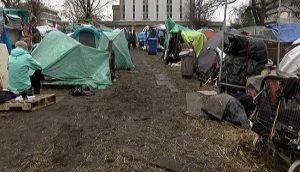 Apparently the squatters are making a sit-in to protest homelessness.

A view of the Christ Cathedral Church overlooking tent city before the block party at the camp in Victoria, B.C., Thursday, February 25, 2016. Supporters came over from Vancouver and Abbotsford during the planned soft eviction day to lend their support. (Credit: CP/Chad Hipolito).

The first arrivals set up camp last fall, back when there was still a lawn. 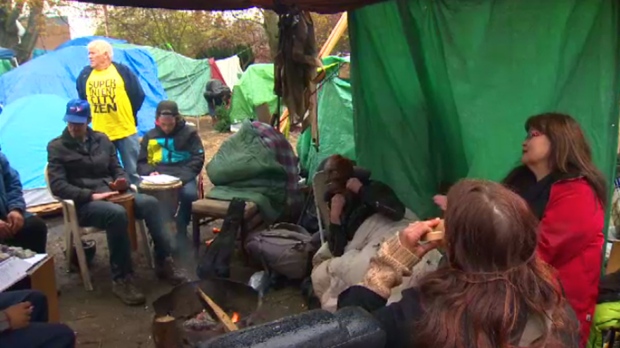