From the diary of a Syrian man living under DAESH control.

DAESH is an acronym for the Arabic phrase “al-Dawla al-Islamiya al-Iraq al-Sham” (Islamic State of Iraq and the Levant).

Watch the short animation film: Diary Of Life Under Islamic State Control in the Documentaries section.

It was Mother’s Day when DAESH took over his city Al-Raqqah.

The sudden siege by Islamic Extremist fighters was horrific and shocking – and the horrific violence on unsuspecting civilians was immediate.

The heads of the dead placed on posts for display of power and a warning – all citizens are forced to come to the beheading, including children. 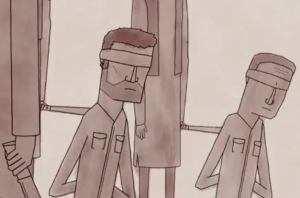 One day a man was being publicly lashed for homosexuality.

The author of this diary was given 40 lashes for cursing out loud in the street.

Public smoking is not allowed – the punishment was an immediate beating.

Men’s pants must be one inch above the ankle – punishment was a week long Shia course.

People are no longer allowed to meet or socialize in public – if caught they will be accused of conspiring against ISIS – punishment is beheading.

Male doctors are not allowed to treat female patients.

Morality police enforced a ban on all televisions from shops.

Price of food more than tripled due to cost of paying fees thru many new checkpoints.

Author’s store sold less food in two months under Daesh control, than he used to sell in one week.

Each citizen was forced to attend Shia lessons every night, and shop owners had to shut down and attend.

After a week long course – they are told to return to new Islam as born again Muslims.

During this time a mosque built over 1,300 years, ago was demolished.

One evening, the Author’s friend and neighbour did not show up for Daesh lesson – his friend was sentenced to beheading, but managed to flee the city. 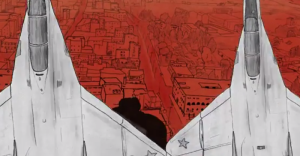 Sound asleep, the author wakes to the sounds of war planes above, bombs landing nearby, and his neighbour’s children crying.

“Isn’t the terrorism we suffer on the ground enough, now you bring it from the skies as well”, the author writes, after a Russian airstrike on his town kills and dismembers adults and children.

The next day, the author steps outside and looks around at the destruction, into the eyes of the once bright and happy faces of his neighbours, only to be greeted by “dead eyes of broken lives and broken hearts.”

Walking home a few days later, the author passes his friend’s house, (the neighbour who had previously not shown up for Daesh lessons). The author described his friend as a simple living father and husband, not an activist. Yet there he was, beheaded, butchered and his body parts placed on display in front of his own house. A home he shared with his family, including his elderly mother.

The diary’s author decided it was time to leave.

The end of his diary.

Watch the short animation film: Diary Of Life Under Islamic State Control in the Documentaries section.