The images most often associated with Yemen today are those of war, poverty and dire humanitarian crises. Yemeni photographer Thana Faroq, who is based in Sana’a, set out to prove that life exists beyond the war.

On her Facebook page ‘Everyday Yemen‘, she collects stunning images of life beyond the fighting — vendors laughing in the market, children giggling on a curb, a game of darts in the streets.

Yemen was once a pivotal crossroads for travel and commerce, flourishing as a center of the textile and spice trades.

The country is considered the birthplace of coffee and continues to celebrate rich customs and traditions, including creating impressive works of literature and theater.

“The purpose was to show that love and peace could exist amidst destruction and death,” Faroq said (in an email to Huffington Post).

“I aimed to tell stories of coping and resilience and that ordinary people could be heroes as well.”

These rare images are a reminder of the beauty of everyday life in Yemen despite the brutal war. Take a look at the heartwarming images below, which continue to prove that life exists beyond the war. [01]

For 100 days I’ve been documenting stolen moments of peace. Some I presented and some I had kept, some were captured by camera and other were appreciated by the eyes. Here’s another one for tonight of hope and life we continue having passion for. (Photo/ quote: Thana Faroq). 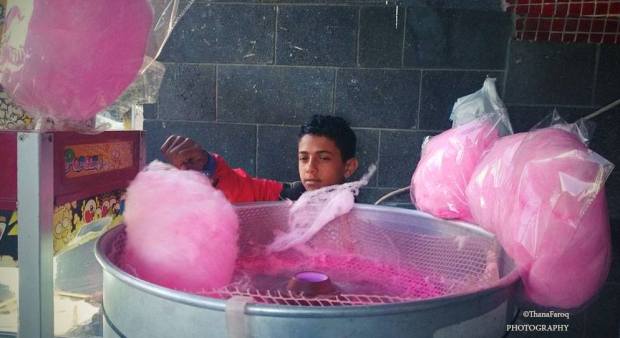 The strangest thing I’ve ever heard about a cotton candy: “ Would you like one, it’s good for the hair & skin!! ”This kid is one of the real warriors. He’s always there near Alkumim center in spite of the escalating conflict with a fighting spirit and great marketing skills. (Photo/ quote: Thana Faroq).

Two young vendors arrange date products at market in the old Sana’a for Ramadan. “The date we sell here is the best. You won’t find like it in the whole world”. (Photo/ quote: Thana Faroq).

For this kid to carry bread under this hard conditions has become a sign of life and hope for those who see him. (Photo/ quote: Thana Faroq).

Father says life teaches you many lessons to grow mature and strong and that what we are going through is just the hardest one. (Photo/ quote: Thana Faroq). 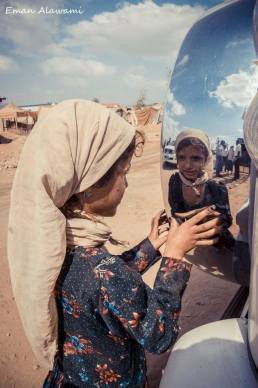 How do I look Beautiful? at Almazrraq Camp. (Photo by Eman Alawami).

One of the grain grinders in town is about to shut down due to the absence of electricity and fuel. “This should be the busiest time of the year as the holy month of Ramadan is approaching and people rush to grind their flour!” he says. “I keep turning people away and you can imagine how my income has been affected.” (Photo/ quote: Thana Faroq). 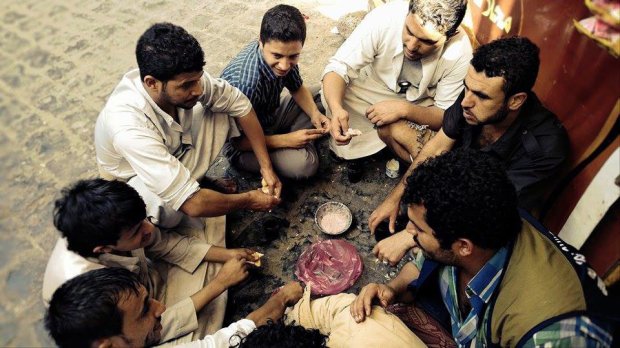 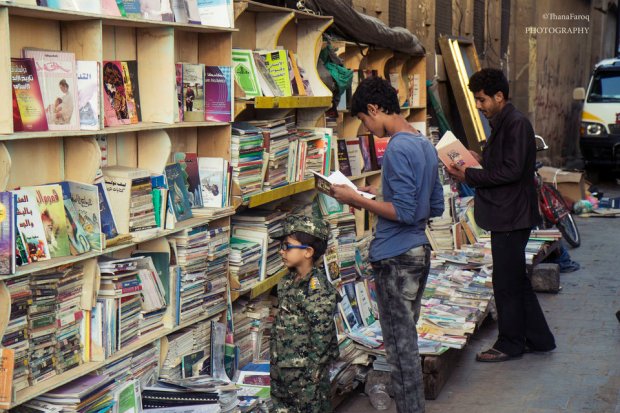 Without electricity, many residents turn to book shops like this one, seen on May 10, 2015. (Photo/ quote: Thana Faroq).

Friends met today for tea time at one of the beautifully decorated cafes in Sana’a. We deserve to live. (Photo/ quote: Thana Faroq).

It often stops me stores that still provide traditional clothing, only to realize how beautiful things were back then. (Photo/ quote: Thana Faroq).

Three men sit in the old city of Sanaa on April 19, 2015. “We are enjoying our cup of tea under the melody of those stupid jets hovering all over,” one says. (Photo/ quote: Thana Faroq).