Once again Canadian Prime Minister Justin Trudeau shows the world how to lead – as peacekeepers and humanitarians – when he made the official statement that Canada would be recalling six jets that have been bombing targets in both Iraq and Syria; putting an end to the attack role Canadian military had taken under the dark days of ‘Harper Government‘… Alistair Reign.

Trudeau’s Liberals won an election last October promising to withdraw the jets but came under pressure from allies who feared the decision could weaken efforts to combat the militant group. Bombing began in November 2014 under the previous Conservative government.

“We can’t do everything .. we were guided by our desire to do what we could do best to help in the region and to do it in the right way,” Trudeau told a news conference.

Canada will end its bombing missions by (February 22, 2016) but keep two surveillance planes in the region as well as refueling aircraft, and triple the number of soldiers training Kurdish troops in northern Iraq to about 200. 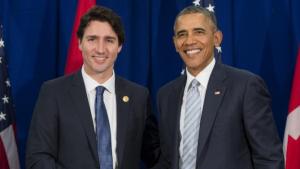 Officials in the United States welcomed the announcement, which came after sustained diplomatic pressure from major allies to persuade Canada to do as much as possible.

(In other words they pressured PM Trudeau to stay in the fight killing hundreds of thousands of innocent civilians – and Justin held his ground – sticking to our Canadian way… Alistair).

“I’m confident we are going to continue to have discussions with the Canadians about additional steps they can take to further enhance our counter-ISIL efforts,” said White House spokesman John Earnest.

He said Trudeau had talked to Obama on Monday. The two will meet in Washington next month.

Canada’s decision came as the Syrian army advanced towards the Turkish border on Monday in an offensive backed by Russia and Iran.

Trudeau said the new mission would be engaged for at least two years and then be re-evaluated.

The best way to promote long-term stability was to help local people fight to get their territory back, he added. 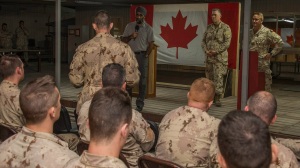 Canadians’ appetite for foreign military missions dropped after 10 years of involvement in Afghanistan that ended in 2011, during which 158 soldiers were killed.

(Really? As a Canadian I am offended by that word ‘appetite’ in reference to war – that is an American expression… Alistair).

Last March, one Canadian soldier died and three others were injured in a friendly fire incident in Iraq. (Americans firing on Canadians… Alistair).

Defence Minister Harjit Sajjan conceded there would still be risks for the trainers.

“This is a conflict zone and a very high threat environment,” he said by phone.

Opinion polls show Canadians are sharply divided over the role of the armed forces in the fight against Islamic State.

The World Post: Canada To End Bombing Missions In Iraq And Syria