A man holds a copy of the Quran at a protest against Niger President Mahamadou Issoufou’s presence at a Paris rally after the Charlie Hebdo massacre, Niamey, Niger, January 2015. (Photo: Tagaza Djibo/ Reuters).

Boko Haram—the regional affiliate of Islamic State and one of the world’s deadliest terrorist groups—has accelerated its campaign of almost daily suicide bombings. Just last month, the group massacred 86 people, many of them children, in the Nigerian village of Dalori and 32 others in the Cameroonian village of Bodo.

To the west, al Qaeda’s regional franchise has been waging war on the government of Mali and expanded its reach last month to the previously peaceful country of Burkina Faso, slaying at least 30 people—many of them Westerners—in an assault on a luxury hotel.

In the east, another al Qaeda affiliate, Somalia’s al-Shabaab, overran an African Union military base three weeks ago and slaughtered more than 100 Kenyan troops.

Today the area has become the fastest-growing front of global jihad—and perhaps its deadliest.

“The Islam that is spreading through society in Africa today is the new active Islam, not the dormant, Sufi, private-life only [version]. It’s going into policy, into economy, into culture, into education. It’s going into public life,” said Hassan al-Turabi, the leading ideologue of political Islam in Africa, who hosted Osama bin Laden and other al Qaeda leaders as Sudan’s de facto ruler in the 1990s. 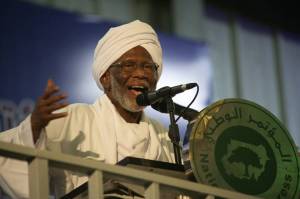 Facing this challenge, the U.S. and other Western countries have increasingly chosen to prop up chronically weak African states that can’t handle the onslaught on their own.

In 2013, France launched an outright military intervention to prevent a jihadist takeover of Mali, a former French colony, and Paris still maintains some 3,500 troops in Mali, Niger, Mauritania, Burkina Faso and Chad.

Since then, the U.S. has established a drone base in Niger and is setting up another in Cameroon, in addition to sending special-operations forces to several countries in the region. The U.K. also has dispatched military personnel to help fight Boko Haram.

Africa is now crisscrossed by war zones stretching from the Indian Ocean to the Atlantic.

Thus far, the rivalry between Islamic State and al Qaeda—Sunni terrorist groups that differ in their tactics and policies but have similar aims – has kept these insurgencies separate, but that may not last.

Meanwhile, the operations of these African militant groups have become increasingly sophisticated, often thanks to expertise and advice shared by their patrons and allies in the Middle East.

Widespread Internet access and increasingly easy travel have made these connections far simpler than just a decade ago. The collapse of the Libyan state in 2011 and the subsequent takeover of several Libyan towns by affiliates of Islamic State and al Qaeda also provided a nearby redoubt of jihadist control and ambition.

Boko Haram — which roughly translates to “Western education is forbidden” — recently declared its allegiance to Islamic State and has put the new connection to use, Western and African officials say.

The group has refined its propaganda videos, procured new weapons and improved its roadside-bombing techniques. 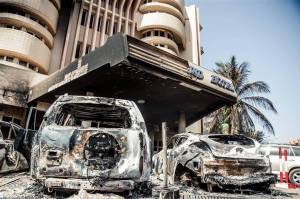 “To plan the kind of operations that Boko Haram carries out, you need people of proven intelligence. They must be receiving explosives specialists and strategists,” said Brig. Gen.Jacob Kodji, who commands Cameroonian forces battling Boko Haram in the country’s war-ravaged Far North region. “What they want is to create a caliphate and dominate a good part of Africa.”

As the continent’s weak, secular, postcolonial states have failed to deliver prosperity, basic services and good governance, their legitimacy has frayed — and their frustrated citizens have increasingly sought answers in Islam.

In doing so, they often have abandoned the traditional religious establishment and adopted uncompromising ideologies imported from the Middle East, where a similar process began generations earlier.

“These people would say, ‘Your problems exist because you are led by the Western system, and as long as you don’t take the great Islamic way, these problems will remain.’  that’s a very simple and effective explanation, and it worked,” said Moussa Tchangari,who runs a human-rights group called Alternatives Espaces Citoyens in Niger.

In Niger and many neighboring countries, the pace of this form of Islamization has been dizzying.

The surprising degree of Islamization in Niger, which officially remains a secular republic, burst into the open a year ago, after the deadly jihadist attack in Paris on the satirical magazine Charlie Hebdo.

Niger’s president, Mahamadou Issoufou, who is close to French President François Hollande, swiftly jetted to Paris to walk alongside other world leaders in a huge street march against violent extremism.

But back home in Niger, many saw Mr. Issoufou’s visit as an endorsement of Charlie Hebdo’s allegedly blasphemous cartoons about Islam and the Prophet Muhammad.

Furious crowds gathered in the capital, Niamey, and in provincial cities, torching more than 40 churches and the French cultural center. At least 10 people died in the rioting, which lasted days and deeply unsettled the country’s Christian minority.

Of course, Islam—and even Islamic radicalism—aren’t new to sub-Saharan Africa. 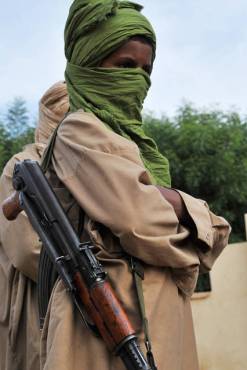 Only the arrival of European colonialists — and Christian missionaries… created a Muslim-Christian religious divide that still dominates the politics of many African countries, such as Nigeria and Ivory Coast, and led to the 2011 breakup of Sudan.

With few exceptions, however, African Islam remained traditionally Sufi and uninvolved in politics.

In the era of European empires and the first decades of postcolonial independence, such syncretic practices remained largely unaffected by the political and religious changes sweeping the Middle East.

But after the global rise of political Islam that followed the Iranian Revolution of 1979, Africa became increasingly connected to the broader Muslim world — and Africa’s Sufi traditions came under attack.

Though Shiite Iran has made some inroads, particularly in Nigeria, with conversions to its minority sect of Islam, the charge in Africa has been led by Saudi Arabia’s ultraconservative Sunni religious establishment. Muhammad ibn Abdul Wahhab, the puritanical 18th-century preacher whose teachings remain the foundation of the Saudi state, deemed Sufis heretics and ordered the razing of their graves and shrines.

For Saudi clerics, eliminating such heretical “innovations” and returning to the pure, strict Islam practiced by the Prophet Muhammad became the focus of world-wide religious outreach.

The arrival of modern communications accelerated this trend, bringing Africa’s once-isolated Muslim communities into the turmoil sweeping the broader Islamic world—and undermining the power of traditional clergy who had preached accommodation with governments and non-Muslims.

“Internet and mobile telephony have turned the slow drip into a fire hose,” said J. Peter Pham, director of the Africa Center at the Atlantic Council, a think tank in Washington, D.C.

“A lot of West African Islam was based on practices that were not typical in Orthodox Sunni Islam, on ritual rather than learning and scholarship. But in a world where anyone can look up theology on the Internet, it is no longer credible.”

Proselytizing efforts by Saudi charities—and, to a lesser extent, by institutions from Qatar and Turkey—also have flooded Africa with money.

Thousands of African theology students have been trained in the Middle East in recent decades, particularly at Saudi Arabia’s Islamic University of Medina, often to return as teachers or imams at the lavish new mosques that the Saudi kingdom has built across the continent.

“What they brought back is an Islam that doesn’t take into account the realities of our countries,” said Ali Abdel-Rhamane Haggar, the rector of the University of N’Djamena in Chad and a former adviser to the country’s president. “But it’s easy to recruit amid the poverty, and the Wahhabis are very rich.”

“The traditional imams have always been seen as men of the system, preaching patience and not struggle. As the system is not working, more people are getting closer to those who contest rather than those who legitimize what is going on,” said Mr. Tchangari, the human-rights activist in Niger.

Perhaps the strongest such Saudi-inspired revivalist movement in Africa is the Izala Society (formally known as the Society for the Removal of Innovation and Re-establishment of the Sunnah), which sprang up in northern Nigeria in the late 1970’s to campaign against Sufi practices. It has since gained ground in several neighboring countries. 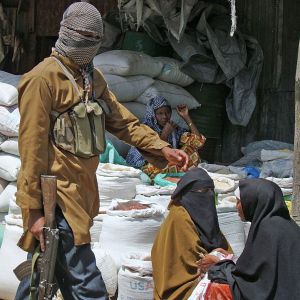 A leading Izala-influenced sheik was Ja’afar Adam, a graduate of the Islamic University of Medina who presided over a popular mosque in the Nigerian city of Kano.

One of his favorite pupils was Mohammed Yusuf, the preacher who would go on to establish today’s Boko Haram.

Yusuf, who repeatedly traveled to Saudi Arabia, quickly became much more radical, seeking to destroy rather than to change existing African states such as Nigeria and rejecting any Western influence in the Muslim world.

In 2007, after Adam publicly condemned his former student, Yusuf ordered the scholar’s assassination.

Having spawned Boko Haram, the Izala Society has become one of its main targets, and several prominent Saudi-backed clerics have been gunned down since then.

“It’s one of the unintended consequences. People adopt the Saudi ideology and internalize it, and then they realize that Saudi Arabia itself is not living up to that ideology, and so it becomes their enemy,” said Jacob Zenn, a specialist on Nigeria and African security at the Jamestown Foundation.

Yusuf was killed in Nigerian police custody in 2009.

Boko Haram has devastated large parts of Nigeria, Cameroon, Chad and Niger, launching attacks that sometimes have involved up to a thousand militants, as well as tanks stolen from Nigerian armories.

At least 17,000 people have died in the continuing conflict, and 2.6 million have been uprooted from their homes.

“These people think that all the Muslim communities that aren’t like them are unbelievers. This is how they brainwash those children,” said Sheikh Abdadayim Abdoulaye Ousman, a Sufi cleric who oversees Chad’s Supreme Council of Islamic Affairs. “For these extremists, the goal is power, not religion.”

Even Mr. Turabi, now a Sudanese opposition politician, says that he is perturbed by how violent the African Islamist awakening that he championed for decades has become, especially in the case of Boko Haram.

“It’s a revival, but when they are faced with a challenge, they become very active, even overactive,” Mr. Turabi said. “They want to hit, to struggle and destroy—but they do not know how to build anything.”

This article has been shortened, use the link below to read the full document.