But despite Sanders’ Twitter success, Trump stayed Trump on social media, dominating the conversation — from his highs (Sarah Palin’s endorsement) to his lows (re-tweeting a neo-Nazi).

What likely helped O’Malley was the Democratic debate on Sunday night, a rare, and vital, moment for him on the public stage.

An O’Malley quote from the debate, pinned to the top of his page, garnered him more than 1,000 likes, easily 10 times more than a typical tweet of his receives.

We cannot keep talking past each other. We are one. We must help each other if we want to succeed. #DemDebate

Trump and Sanders had the most interactions with their tweets over the week, according to social media tracking firm Socialbakers:

It was Sanders, though, who had the most popular tweet of the week, besting Trump with a dose of his own medicine:

A Bernie tweet about how he polls in hypothetical matchups [sic] against the Republican candidates had more than 15,000 likes and 8,000 retweets.

Sanders also had six of the 10 most popular tweets of the week, with Trump taking up the other four slots.

Trump’s most popular tweet was about attacks by radical Islamists, which garnered more than 15,000 likes and 7,000 retweets.

More radical Islam attacks today – it never ends! Strengthen the borders, we must be vigilant and smart. No more being politically correct.

Carson, despite coming in fifth in Facebook conversation level, had the second-most interacted-with page, with more than 2 million shares, comments or likes in the past week. 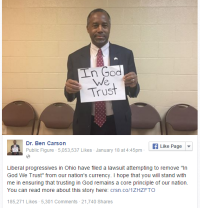 While Trump had eight of the most popular Facebook posts of the week, Carson had the third most popular, a photo of himself holding a sign that says “In God We Trust” in response to a lawsuit trying to get the phrase taken off of the nation’s currency. 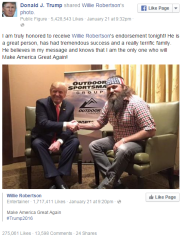 But along with re-tweeting a neo-Nazi, Trump also used footage of Russian veterans instead of American vets in a video he made for Facebook on Friday vowing to reform the Veterans’ Administration.

The original video was replaced with a new version (this video post has since been removed) that excluded the Russian footage a few hours later.

A look at Google searches in Iowa ahead of the states’ caucus on Feb. 1 shows some illuminating data on what potential caucus-goers might be thinking.

Google search (among Democrats) volume for the past week showed

Sanders also had the digital adverstising win of the week — he released an ad that doubles as a minute-long tribute to his supporters.

The candidate himself doesn’t speak until he “approves this message” at the end of the ad — the rest of the sound comes from Simon and Garfunkel’s “America,” which plays over clips of Americana, families, and farmers, and shots of thousands of cheering and celebrating Sanders fans.

The ad had more than one million YouTube views in just 24 hours after the Sanders campaign posted it Thursday.

(Do you feel the Bern? Use the comment box below to share your opinion on the 2016 Presidential Primary Candidates.)

POLITICO: Sanders gives Trump a run for his money on social media