Survivors comfort each other after the brutal attack on university students in northwest Pakistan. (Photo: Daily Mail Online).

His son went on to found the Awami National Party, a secular, leftist movement whose vision for Pakistan is starkly opposed to that of the Taliban and other Islamic militants, who for more than a decade have been fighting to overthrow the government and establish a strict Islamic State.

A chemistry lecturer known as ‘The Protector’ died saving his students by firing back at Taliban militants during a deadly attack on their university that left 30 dead and dozens injured today.  (Photo: Daily Mail Online).

Attack has chilling echoes of massacre at nearby army school last year and attacks by Taliban on girls’ education. It is also believed the school may have been targeted because it is named after the late secular icon and ally of Gandhi.

Chemistry lecturer Syed Hamid Husain, (age) 32, shielded students by opening fire on militants as they stormed campus. As militants stalked the campus, executing targets one by one, assistant chemistry professor Husain ordered his pupils to stay inside as he confronted the attackers.

The father-of-two opened fire, giving them time to flee before he was cut down by gunfire as male and female students ran for their lives.

He was known to his pupils as ‘The Protector‘ because he was a keen hunter and kept a 9mm pistol at school, possibly in light of previous militant attacks.

One student said: ‘We saw three terrorists shouting “Allah is great!” and rushing towards the stairs of our department.

‘One student jumped out of the classroom through the window. We never saw him get up.’

He described seeing Husain holding a pistol and firing at the attackers, adding: Then we saw him fall down and as the terrorists entered the (registrar) office we ran away.‘

A man walks down the blood-stained stairs leading down from the roof of a dormitory where the militant attack took place. (Photo: Daily Mail Online).

Geology student Zahoor Ahmed said Husain had warned him not to leave the building after the first shots were fired.

‘He was holding a pistol in his hand,’ he said. ‘Then I saw a bullet hit him. I saw two militants were firing. I ran inside and then managed to flee by jumping over the back wall.‘

‘They fired directly at‘ the professor, sociology student Muhammad Daud said, describing Husain as ‘a real gentleman and a respectable teacher‘.

Students and university officials paid tribute to the slain academic, saying he had been nicknamed ‘The Protector’ even before his death.

‘He would always help the students and he was the one who knew all their secrets because they would share all their problems with him,’ said 22-year-old geology student Waqar Ali. ‘He was referred to by students as “The Protector”.’ 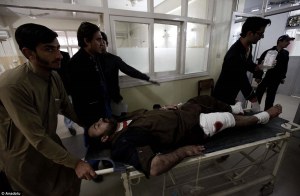 Rescuers move an injured victim at a hospital following an attack by gunmen in the Bacha Khan university in Charsadda, about 50 kilometres from Peshawar, which has left 30 people dead and dozens wounded. (Photo: Daily Mail Online).

Dozens of people were killed and injured after militants armed with AK-47s stalked the university.

Husain had been the father of a three-year-old boy and a daughter who had recently celebrated her first birthday, a university administration official told AFP news agency.

He had spent three years studying in the UK for his PhD, the official said.

Mohammad Shazeb, a 24-year-old computer science student, said Husain was fond of gardening and used to joke with the students that they should learn gardening for when they are unemployed.

‘He had a 9mm pistol and used to tell us stories about his hunting trips,’ Shazeb said.

Husain also never missed a game of cricket with the students, he said, adding: ‘When someone would go to bowl to him, he would joke: ‘Remember kiddo, I have a pistol”.

Tributes were also paid online to the slain teacher, whose funeral was held in his home village of Swabi Wednesday evening.

An injured man is taken to a hospital in Charsadda, in northwestern Khyber Pakhtunkhwa province. (Photo: Daily Mail Online).

Pakistan’s President Mamnoon Hussain expressed his grief and condolences to the man’s family.

Police inspector Saeed Wazir said 70 per cent of the students had been rescued.

‘All students have been evacuated from the hostels, but militants are still hiding in different parts of the university and some students and staff are stuck inside,’ he said before the firing had stopped, adding that it was unclear how many gunmen were involved.

Taliban gunmen stormed the school near the city of Peshawar, leaving dozens dead and injured in pools of blood across the campus. (Photo: Daily Mail Online).

Mansoor, who was the mastermind mind the Peshawar school attack, said a four-man Taliban team carried out the assault in Chasadda.

He said it was in revenge for the scores of militants the Pakistani security forces have killed in recent months.

However, a spokesman for the main Taliban faction in Pakistan later disowned the group behind Wednesday’s attack, describing the assault as ‘un-Islamic.‘

Mohammad Khurasani also denied earlier reports that he had endorsed Mansoor’s claim and said that those who carried out such attacks would be tried before an Islamic, or Sharia court.

Such statements from among the Taliban are not uncommon since the group has many loosely linked factions and is indicative of the deep divisions and splits among the insurgents.

Fanatics stormed the Bacha Khan university in Charsadda, around 30 miles from the city of Peshawar, in the latest outrage to hit the militant-infested region.

Many were apparently shot in the head execution-style as militants armed with AK-47 machine guns stalked the premises.

Television footage showed military vehicles packed with soldiers driving into the campus as helicopters buzzed overhead and ambulances lined up outside the main gate while anxious parents consoled each other. (Photo: Daily Mail Online).

A senior security officer said 90 per cent of the campus had been secured after a three-hour gunfight with the militants ended, and that 51 people were wounded and four gunmen were killed.

Shabir Khan, a lecturer in the English department, said he was about to leave his university housing for the department when firing began.

‘Most of the students and staff were in classes when the firing began,’ Khan said. ‘I have no idea about what’s going on but I heard one security official talking on the phone to someone and said many people had been killed and injured.’

Prime Minister Nawaz Sharif: ‘We are determined and resolved in our commitment to wipe out the menace of terrorism from our homeland.‘

Charsadda is located in the country’s volatile north-west, around 40km north-east of Peshawar where the Taliban massacre of 130 children occurred in December 2014. (Photo: Daily Mail Online).

Teachers in northwest Pakistan were given permission to carry firearms in the classroom after Taliban militants massacred more than 150 people, the majority of them children, at a school in the city of Peshawar in 2014.

The attack on an army-run school in the city, some 30 miles from Charsadda, was the deadliest in Pakistani history, and saw armed militants go from room to room slaughtering students and staff.

Teachers’ associations had objected to arming staff, saying it was not their job to fight off militants.

As many as 3,000 people were reported as present at the university when the gunmen arrived. 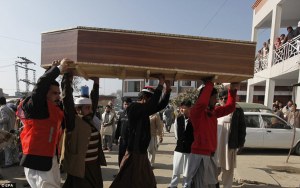 He was a Pashtun independence activist who campaigned against the rule of the British Raj. January 20 – today – is the 28th anniversary of his death.

The attack came a day after a suicide bomber blew himself up close to a police checkpoint in northwestern Pakistan on Tuesday, killing at least 10 people and wounding more than 20.

The bomber rammed his motorcycle into a police vehicle next to the roadside checkpoint in the Jamrud area on the edge of Pakistan’s volatile Federally Administered Tribal Areas, local government official Munir Khan said.