Local media shows footage of remains of the Splendid Hotel in Burkina Faso's capital, after it was attacked and seized by Islamist militants. At least one hundred twenty-six people were freed and four extremists killed in a military operation that began Friday evening and ended on Saturday morning. At least 28 civilians have been killed.

Burkina Faso and French forces killed the three extremists, and they regained control of the Splendid Hotel in Ouagadougou, Minister of Security and Internal Affairs Simon Compaore said Saturday, according to The Associated Press. A fourth extremist was killed when security forces were clearing out another hotel, said President Roch Marc Christian Kabore, who added that two of the three attackers were female.

Local Faso media has provided the following raw video coverage of the events and aftermath of the shootings.

A doctor who treated some of those wounded in the attack said victims told him that the attackers appeared to target Westerners but victims’ nationalities were unknown. 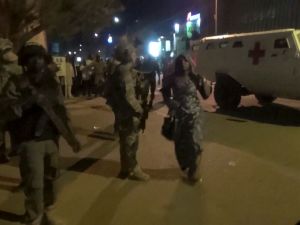 “The hotel is popular with Western visitors, United Nations workers, diplomats and and French soldiers based in Burkina Faso for Operation Barkhana, which is fighting Islamist militants across the Sahel region. Local media shows footage of remains of the Splendid Hotel in Burkina Faso’s capital, after it was attacked and seized by Islamist militants.

““There are foreigners [among the dead], possibly Europeans and locals,” said Anna Rachina-Kulibali of Russia’s Honorary Council in Burkina Faso. She told Tass news agency the Cappuccino Café is owned by a Ukrainian citizen.

“Mr. Compaore described the three attackers first killed as “an Arab and two black Africans“, adding that 33 hostages had been wounded.

“Burkina Faso’s new government, which was appointed on Wednesday following the election of President Roch Marc Kabore in November, was due to hold an emergency cabinet meeting on the crisis.” [01] 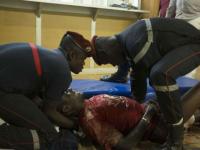 Paramedics tend to a wounded man in the surrounding of the hotel Splendide and the cafe Cappuccino during the attack on January 15, 2016. (Photo: Independent).

Survivors who escaped from the city centre Hotel Splendid and the nearby Café Cappuccino told how the assailants struck just after 8.30pm as crowds were building on Friday evening, firing into the air and crying “Allahu Akhbar” before starting to execute people at point-blank range.

In the Cappuccino café, diners described pretending to be dead for almost an hour as the terrorists picked over them, killing anyone still alive before setting it alight and shooting at those who tried to escape the acrid smoke.

“They kept coming back. You’d think it was over, then they’d come back and shoot more people. They would come back and see if the white people were moving and then they would shoot them again,” a Slovenian social anthropologist told Reuters.

“A Message Signed with Blood and Body Parts.”

Vehicles on fire outside the Splendid Hotel in Ouagadougou, capital of Burkina Faso, after it was attacked by Al Qaeda militants on the night of January 15, 2016. (Photo: Reuters TV)

The North Africa branch of al-Qaida, founded in Algeria, claimed responsibility for the bloodbath even as it was unfolding in a series of statements published and translated by the SITE Intelligence Group. The al-Qaida affiliate known as AQIM — now working in tandem with feared extremist Moktar Belmoktar — later released an audio clip it said was a conversation with one of the fighters later slain in Ouagadougou.

The message said the attack was directed at “the occupiers of our lands, the looters of our wealth, and the abusers of our security,” according to SITE and sought to punish them “for their crimes against our people in Central Africa, Mali, and other lands of the Muslims, and to avenge our prophet.“

Among the victims from 18 different countries were the wife and 5-year-old daughter of the Italian man who owns the Cappuccino Cafe, where at least 10 people died in a hail of gunfire and smoke after the attackers set the building ablaze before moving on to the Splendid Hotel nearby. 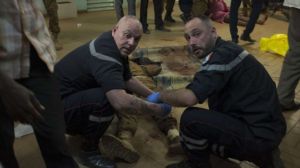 Paramedics rush to the scene at the capital of Faso terrorist attack by Al-Qiada on January 15, 2016. The attack comes less than two months after a terrorist attack at the Radisson Blu Hotel in the Malian capital Bamako on November 20 in which 20 people died including 14 foreigners. (Photo: Almanac).

Some survivors cowered for hours on the roof or hid in the restaurant’s bathroom to stay alive.

Two French and two Swiss citizens were confirmed among the dead late Saturday by the two countries’ foreign ministries.

“I heard the gunfire and I saw a light by my window and I thought it was fireworks at first,” said Rachid Faouzi Ouedraogo, a 22-year-old accounting student who lives near the scene of the carnage. “I raced downstairs and once outside I saw people running through the street and four people firing on the people at Cappuccino.“

Dozens were wounded in the overnight siege, including many suffering gunshot wounds.

“We appeal to the people to be vigilant and brave because we must fight on,” President Roch Marc Christian Kabore said on national radio Saturday.

“We know that the gunmen won’t get out of the hotel alive,” said one witness of the overnight siege, who gave only his first name, Gilbert. “Our country is not for jihadists or terrorists. They got it wrong.” [02]

Jérémie Bangou, who was meeting a friend at the Cappuccino café where rescue workers found 10 bodies on the terrace, said the attackers were “like children”.

“I had the impression that they recoiled every time they fired a shot because their weapons seemed so heavy for them,” he said.

Eyewitnesses watching in horror from nearby buildings described “a complete bloodbath” which progressed into Saturday morning as local security forces and French and American commandos sought to take back control, hampered by booby traps the militants left in their wake.

Philip Hammond, the British foreign secretary, sent his “deepest condolences” to the families of those killed in the attack.

“The United Kingdom stands with President Kaboré and the people of Burkina Faso in the fight against terrorism,” he said.  [03]

“On behalf of all Canadians, we offer our deepest condolences to the families, friends and colleagues of all those killed and a speedy recovery to all those injured. We are deeply saddened by these senseless acts of violence on innocent civilians.

“We have offered assistance to the Burkinabé authorities in their investigation of this terrible crime.” [04]