Please, don’t get me wrong. I’m enjoying the circus Donald is creating as much as the next person. He is causing an uproar in the Republican Party and they deserve it. The Republican Party is a party of traitorous scumbags, but so is the Democratic Party. I’ll say it again, I’m not excited about ANY of these candidates in either party. 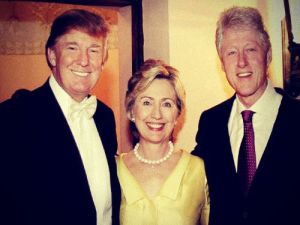 Maryanne Trump Barry (born April 5, 1937) is a Senior United States Circuit Judge of the United States Court of Appeals for the Third Circuit. She is the daughter of real estate developer Fred Trump and Mary MacLeod Trump and the older sister of real estate/entertainment magnate Donald Trump… appointed by none other than… BILL CLINTON. (Photo/credit: The Daily Sheeple).

So, having said that, I just happen to find Donald the most entertaining and when he says something so true about the problems of illegal immigration, then I’m going to laugh and pass that on. HOWEVER, Donald Trump is likely as phony as a three dollar bill. He is a con artist extraordinaire, a showman, an ACTOR.

Here is a great article every Trump supporter needs to read. Before reading this I was not aware of Mr. Trump’s deep ties to the Clintons. Read it and decide for yourself before you put up any signs for him. Also, much of Trump’s politics is unknown and some of what is known is patently unconstitutional.

If you ask me, “David, who do you trust to lead this nation among the candidates?” I’d say, “NO ONE.”

“Saving America?” No, Donald Trump Is a Clinton Operative by Melissa Dykes at The Daily Sheeple.

“”It’s been pretty shocking that people are actually walking around talking about how Donald Trump is going to “Save America”. If you ever needed a sign that the country is lost, that’s gotta be it.But worse is the fact that Trump is so obviously a Clinton plant and people just ignore the facts because right now he’s “telling it like it is”.

“More like he’s tell you what you want to hear at a time when people are desperate to hear any truth coming out of the American political-industrial complex.First of all, if anyone ever had half a chance in Hell of changing anything in this country, rest assured The Powers That Shouldn’t Be would not let that person anywhere near the Oval Office. The last time this country had a president that tried to change things, that person got his brains blown out in front of the entire country.

“But here’s what actually going on. Hillary Clinton’s private email server woes are not going away, just like the Clinton camp surely had an inkling they wouldn’t. Back in mid-March, The New York Post reported that Valerie Jarrett, Obama’s senior adviser, purposefully leaked details regarding Hillary Clinton’s private email to the press through people outside the White House in order so that the leak couldn’t be directly traced back to the administration.The scandal bomb, as I reported then, was perfectly timed just before Hillary’s announcement to run as president. Everyone knew by that point that Hillary could  announce her run at any time. And she did, just weeks later, officially announce her bid for president on April 12, 2015.

So how does this all connect to Trump?

Knowing the email scandal wouldn’t go away, the Clinton camp needed a big distraction. So what did they do?

They phoned a friend. In late May, Bill Clinton had a private conversation with his good friend, Donald Trump just before Trump decided to run himself.

Now why would a good friend of the Clintons pose himself as opposition like that?

And I do mean good friend. Here are the Clintons at his wedding in 2005:

Trump has also donated to the Clinton Foundation, a point that hasn’t gone unnoticed by people like Senator Rand Paul. Yeah, about that:

“I gave to many people before this,” Trump said at the debate today. “When they call, I give. And you know what, when I need something from them two years later, three years later, I call them. They are there for me.”

(And surely, vice versa… I’ll pat your back, you pat mine. Let’s continue:)

His comments came in response to an attack from rival Sen. Rand Paul.

“You’ve donated to several Democratic candidates. You explained away those donations saying you did that to get business-related affairs,” Paul said. “And you said recently, quote, ‘when you give, they do whatever the hell you want them to do.’”

But Trump now claims that he just invited the Clintons to his wedding — where they sat in the front row — and they only came and took those schmoozy pictures together simply because he donated. Uh huh. Sure.

In fact, Trump went on to say the only reason he endorsed McCain in 2008 is because Obama did not choose Hillary as his Vice President. 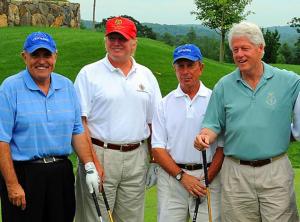 Trump and Clinton went golfing together in 2008. (Photo: The Daily Sheeple).

But again, we’re supposed to believe they are just loose, casual acquaintances and the only reason he invited Hillary and Bill to his wedding was because he donated to their foundation? (An accusation that he later went on TV and backpeddled on after it came out Hillary’s feelings were hurt? He later said he was just joking about paying her foundation so she’d come to his wedding, saying it was “very nice” that the Clintons went.)

The Clinton and Trump daughters are reportedly close friends. Here they are attending the 2014 Glamour Women of the Year Awards. (Photo: The Daily Sheeple).

.So I guess it’s also just a lark that Trump has changed parties five times since the 80s and donated over half a million to Democrats, including to the likes of Rahm Emmanuel and Senator Harry Reid.

This is all about having big friends in high places. Trump didn’t become a billionaire without making friends like that. That’s how the American oligarchy works.

On top of that, if you look at Trump’s politics — what he has supported on the record until now when he’s in the GOP spotlight, he doesn’t even seem like much of a Republican.

Now he’s talking about things like the 14th Amendment is unconstitutional and if he becomes president he will build a wall that spans the entire Southern border and force the Mexican government to pay for it. But that’s not what he was saying just a few years ago on Bill O’Reilly’s show:

Donald Trump: The biggest problem is that you have some great, wonderful people coming in from Mexico that are working the crops, they’re working cutting lawns, they’re doing a lot of jobs that I’m not sure that a lot of Americans are going to take those jobs. And that’s the dichotomy. That’s the big problem because you have a lot of great people coming in doing a lot of work, and I’m not so sure that a lot of other people are going to be doing that work. So, it is a very tough problem, but I do say this, you have a law, or at least you have to establish a law, and I guess we’re sort of a country and other people aren’t supposed to be coming into our country illegally.

Bill O’Reilly: Now, the 15 million illegal aliens already in the United States, what do you do with them?

Bill O’Reilly: All right, on a case-by-case—going to take a long time and a lot of people.

Trump is also a big fan of eminent domain:

John Stossel:Basic to freedom is that if you own something, it’s yours, that the government doesn’t just come and take it away from you.

Ooh, smells like freedom from big government, doesn’t it?

Back on the Clintons, did I forget to mention that Trump is also pro socialized medicine? At least, that’s what he told Larry King years ago:

So that whole Obamacare thing… yeah, about that. He can promise all day now that he’d do away with it, but if Trump actually got anywhere near the White House, would that law really be going anywhere any time soon?

This list could go on and on and on. People are only hearing what they want to hear.

Be willfully blind if you want to, but that “hope and change” thing hasn’t worked out so good in the past. At the very least, the guy is a total flip flopper, but worse, if you look into Trump’s actual political history, he’s looking more and more like a Clinton operative all the time.

And considering the Clintons are really just an extension of the Bush camp anyway and vice versa, two arms of the same beast, you know, what with Bill Clinton saying that George H. W. was like a surrogate father and George W. like a “brother from another mother,” that would make all kinds of sense why in July, Bill reassured Jeb, “a lot of this Trump thing will be taken care of during your debates, if not sooner.”

The only reason he isn’t gone yet since the first debate is that Hillary’s server situation has gotten worse. The distraction continues…

Bill knows that when Hillary gets out of the hot water over this server mess and Trump’s duty is done, Trump will fade back out of the spotlight, having stolen (and wasted) a bunch of the country’s time. And Bill can say that with near certainty. Why?

Bill’s phone call to Trump back in May arranged this whole dog and pony show in the first place.

There were only ever going to be two actual choices in this election, as we’ve been reporting for a long time now. You get a Bush or a Clinton. Period. These are your dynasty families, America.

The country was bought and sold a long time ago. It’s gone. Sorry if the truth hurts, but Donald Trump can’t save you from that.””