The Syrian crisis began in early 2011 when Syrian President Bashar al-Assad began a brutal crackdown on growing peaceful protests throughout the country.

With the use of tanks, attack helicopters, and artillery against protesters and the torture and execution of children, protests spread and opposition groups took up arms. The attacks and counter-attacks escalated into a full-fledged civil war between the Assad regime with allied militias and an array of opposition groups.

The death toll has reached over 240,000 and almost half the country’s people — 12 million men, women and children — have been forced to flee their homes. The majority of civilians have been killed at the hands of the Assad regime, which has targeted schools and medical centers with crude barrel bombs.

The crisis has grown to a regional crisis with severe implications for global peace and security. Regional powers are supplying weapons and other support to both sides, with Iran notably backing the Assad regime and Gulf States providing arms to the opposition.

Sectarian violence related to the conflict has been seen in Lebanon and Iraq and millions of refugees have fled into neighboring countries.

The debate over how to respond to the attacks has deeply divided the international community from acceptance of refugees to the best ways to protect civilians and ultimately to reach a political solution.

FROM PROTEST TO WAR

The Syrian uprising began with protests held in early 2011, demanding release of political prisoners. In March 2011, security forces opened fire on protesters at a “Day of Rage” rally in the southern city of Deraa, triggering days of violent unrest and more civilian deaths.

While the demonstrations in Syria were peaceful at the outset, and called largely for reform of President Bashar al-Assad’s regime, the Syrian government’s violent response led to widespread defections from the Syrian military and provoked the creation of armed opposition.

The brutal response prompted further non-violent demonstrations across Syria, helping to transform and diffuse series of local grievances into a widespread call for the end of the Assad regime.

Sectarian violence also increased with some armed opposition groups committing human rights abuses against Alawite communities due to their perceived support for the government.

The levels of violence prompted the International Committee for the Red Cross to declare the situation in Syria a civil war in July 2012. The new status meant that international humanitarian law applies to all areas where hostilities are taking place.

Fighting and abuses have continued dividing the country into areas controlled by the government and an array of opposition groups. 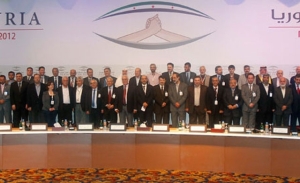 The formation of an opposition umbrella, the Syrian National Coalition in November 2012 and its subsequent international recognition, including from the United States, appeared to increase the likelihood for a political resolution to the unrelenting crisis. But disagreements among opposition forces over the makeup of a post-Assad transition government raised doubt over their credentials as a viable alternative to the Assad regime.

Further complicating peace efforts, the opposition remains deeply divided beyond their common enemy in the Assad regime. Many extremist Islamist elements have poured into Syria. Estimates vary widely as to the numbers of extremist elements making up the opposition, but their forces have been cited as among the most effective in combating the Assad regime, further complicating the crisis and opening worries about what a post-Assad Syria might look like.

The United Nations has condemned the violence against civilians, but has been unable to agree on appropriate action. International efforts to quell the violence began with an Arab League observer mission sent to Syria in late 2011 but failed to end the bloodshed. China and Russia have vetoed four UN Security Council resolutions on Syria aimed at stemming the violence.

Various peace efforts have been tried with the UN now on its third Special Envoy.

The plight of an increasing flow of refugees, captured in a heart wrenching photo of the body of a small boy washed up on a beach in Greece, sparked intense debate within Europe and the United States.

A report commissioned by the UN  Independent International Commission of Inquiry (CoI) on Syria, cites that war crimes, including murder, extrajudicial killings and torture, and gross violations of international human rights, including unlawful killing, attacks against civilians and acts of sexual violence, have been committed in line with State policy, with indications of the involvement at the highest levels of the Government, as well as security and armed forces.

The report also concludes that the Government forces and Shabiha fighters were responsible for the Houla massacre. While opposition forces also committed war crimes, including murder and torture, the CoI says that their violations and abuses were not of the same gravity, frequency and scale as those committed by Government forces and Shabiha militias.

The United States has led the world in supplying of $4 billion in aid to Syrian refugees, but has taken in only 1,500 Syrian refugees in the first four years of the conflict. Though the Obama administration has pledged to take in more, human rights groups and former U.S. officials warn the number remains inadequate.