UPDATE Oct. 4th: A hospital in the Afghan city of Kunduz was hit in an overnight aerial attack that killed at least 19 people, including nine Medecins Sans Frontieres staff and three children. The US has confirmed that it conducted an airstrike “in the vicinity” of the hospital.

The US military said in a statement on Saturday that its air forces conducted a strike “in the vicinity” of a Medecins Sans Frontieres (Doctors without Borders) hospital in Kunduz.

“US forces conducted an air strike in Kunduz city at 2:15am [local time], Oct 3, against insurgents who were directly firing upon US servicemembers advising and assisting Afghan Security Forces in the city of Kunduz. The strike was conducted in the vicinity of a Doctors Without Borders medical facility,” said Gen. John F Campbell, commander of US forces in Afghanistan.

“I am aware of an incident that occurred at a Doctors Without Borders hospital in Kunduz city today,” he added.

Click on photo for the full size picture; stays on same page.

In a brief statement released by the White House, President Obama has extended his “deepest condolences” to the victims of the “tragic incident at a Doctors Without Borders hospital in Kunduz.”

“The Department of Defense has launched a full investigation, and we will await the results of that inquiry before making a definitive judgment as to the circumstances of this tragedy,” read the statement, notably not featuring the terms “airstrike” or“attack” anywhere in the text.

The head of the US-led forces in Afghanistan, General John Campbell, has also offered condolences to the Afghan President Mohammad Ashraf Ghani after the bombing.

According to NATO coalition spokesman Colonel Brian Tribus, the US forces conducted an airstrike in Kunduz at 2:15am on Saturday.

“The strike may have resulted in collateral damage to a nearby medical facility,” he said. “This incident is under investigation.”

“All indications currently point to the bombing being carried out by international Coalition forces,” it said in a statement. “MSF demands a full and transparent account from the Coalition regarding its aerial bombing activities over Kunduz on Saturday morning.”

“We are deeply shocked by the attack, the killing of our staff and patients and the heavy toll it has inflicted on healthcare in Kunduz,” Medecins Sans Frontieres (Doctors Without Borders)  said in a statement.

(Oct 4th Update 12 staff dead), Nine MSF staff have been confirmed dead, while more than 30 are unaccounted for, according to the organization’s official statement.

The medical charity also stated that seven patients, including three children had been killed, while a total of 37 people have been injuried.

At the time that the“aerial attack”occurred there were over 80 personnel, both local and international, inside the building, treating over 105 patients.

“We do not yet have the final casualty figures, but our medical team are providing first aid and treating the injured patients and MSF personnel and accounting for the deceased,” MSF said.

An official from the organization stated the medical charity was frantically trying to phone NATO as Washington bombed the medical hospital for almost an hour, Reuters reported.

The official, who asked not to be identified, said the first bomb landed at 2:10am and MSF staff called NATO officials in Kabul at 2:19am and military officials in Washington a few minutes later. The bombing continued until 3:13am.

Dr Masood Nasim, who was leading the MSF medical team at trauma hospital in Kunduz, said on Thursday that his facility has been at the front line since the hostilities began on September 28, (2015).

“Early on Monday morning, I came to MSF’s hospital here in Kunduz after hearing the sound of shells falling. By midday our hospital was on the frontline, with fighting right outside the gate. You could hear the sound of shelling, rockets and airplanes. Some bullets have come into the hospital, some even through the roof of the intensive care unit,” Nasim said.

Adil Akbar, a doctor at the hospital who was on duty at the time, told AP that the operating theater, emergency room and other parts of the hospital complex had been struck in the bombing.

“I managed to escape after attack but I know that most of the staff and even some of the patients are missing,” he said.

Fighting has been continuing around Kunduz for the past six days after Taliban overran the city on Monday. The US military supported Afghan forces with airstrikes in order to drive the militants back on Thursday. 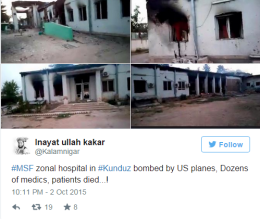 Click on photo for the full size picture; stays on same page.

On Friday, local residents said that some Taliban fighters remained holed up in civilian homes in Kunduz and had been fighting Afghan forces. At least sixty people were killed and around 400 wounded in the fighting since Monday, the spokesman for the Ministry of Public Health, Wahidullah Mayar, wrote on his Twitter account. The government says 200 Taliban fighters were killed.

The three-day Taliban takeover of Kunduz, a city of some 300,000, was an embarrassing blow to the government of President Ashraf Ghani.

During the three days under Taliban captivity, extremists, according Amnesty International, engaged in atrocities, extra-judicial killings, torture, and the harassment of civilians.

Accounts of “multiple credible reports of killings, rapes, and other horrors meted out against the city’s residents must prompt the Afghan authorities to do more now to protect civilians, in particular in areas where more fighting appears imminent,” said Horia Mosadiq, an Afghan researcher at Amnesty International.