Mohamed and his wife, Roqa, took their two young daughters, Rushin and Reema, and fled Syria. Two years and 1,500 miles later, I met them in front of the State Office for Health and Social Issues in Berlin and decided to help them. 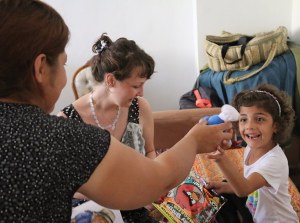 As bombs fell over Syria, Mohamed and his wife, Roqa, took their two young daughters, Rushin and Reema, and fled.

“You are Princess Anna and I am Queen Elsa,” Reema tells me.

“But your name is Anna. It fits better,” she laughs. 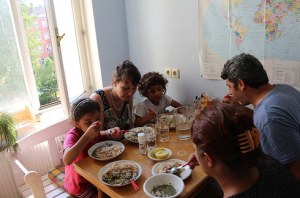 As bombs fell over Syria, Mohamed and his wife, Roqa, took their two young daughters, Rushin and Reema, and fled (Photo: Anna Dushime).

Now we’re all sitting – me, Mohamed and Roqa, and their two daughters – in my kitchen. Mohammed and Roqa are telling me how they fled their home in Aleppo, Syria, and made it to Berlin. The elder daughter, Rushin, nods sometimes in agreement. She is 8 years old and doesn’t sleep well at night. She has constant nightmares. Her parents, Christian Kurds, show me an official looking paper that confirms it. They got it from a doctor at a United Nations refugee camp in Erbil, Kurdish Iraq, to which they first fled in March 2013. Since then the children have rarely been in school. Reema, the younger one, tugs on her mom’s arm to show her a drawing she has made of Princess Anna.

Berlin: Outside the State Office for Health and Social Issues, Rushin and Reema wait with their parents (Photo: Anna Dushime).

I first meet the family the day before, on a Friday in August in the Berlin neighborhood of Wedding. It’s over 86 degrees outside, the sun is beating down relentlessly, and there’s little shade in front of the State Office for Health and Social Issues, which is now the first point of registration for refugees coming to Germany. There are roughly 500 other people waiting to be registered too. They line up to take numbers. There’s no water and little food.

My boyfriend and I show up to the office in response to a call by the organization Moabit Hilft, a neighborhood initiative that aims to help incoming refugees with their daily needs. We have brought things from the supermarket to give out to those waiting — diapers, water, cookies.

It is there that I first see Mohamed. He’s running around incensed, his face and one arm red. I try to ask him what’s going on and he points to the police nearby, making a gesture like he’s using a spray bottle. There has been an altercation between the refugees and security people, and when the police were called in they tried to calm the situation by using pepper spray. Mohamed got sprayed. He points to his daughter: “Her too.” Rushin rubs her eyes and cries silently.

They were lucky. Their boat, carrying 30 adults and 10 children, made it to shore. The boat ahead of them had its engine die; Mohamed and his wife never learned what happened to those on board (Photo: Anna Dushime).

Seeing Mohamed, his wife, and their two kids reminds me of how we fled Rwanda— my mother and her three small children — after our family and friends were killed in the genocide against the Tutsi in 1994. I can’t even begin to imagine what their journey to Berlin must have been like.

I speak no Arabic and Mohamed doesn’t speak English, so it’s hard for us to communicate. I ask a friend who has come with us to the State Office to translate and she helps. Mohamed tells us how Roqa had to watch as her parents were murdered. I can see how hard it is for him to talk about it and don’t ask him any more questions. Mohamed tells us about the bombs that fell on Aleppo at night, how his family decided to flee. “It is better to die at sea than from a bomb,” he says. Tears choke his voice as he describes the journey by inflatable raft from the Turkish city of Izmir to Greece: “‘Two hours straight ahead and then turn right to Greece,’ they told us.”

Mohamed and his wife, Roqa, with their daughter, Rushin (Photo: Anna Dushime).

They were lucky. Their boat, carrying 30 adults and 10 children, made it to shore. The boat ahead of them had its engine die; Mohamed and his wife never learned what happened to those on board.

Once they reached Greece, a Dutch family let Mohamed, Roqa, Rushin, and Reema live in their summer house. From there they went to Macedonia, and from there to Belgrade, the capital of Serbia, and then they set out on foot for the 185-mile walk to the border with Hungary. Mohamed describes sitting in a circle with other refugees for three hours. Serbian border guards relieved themselves next to where they were sitting, he says.

I’m fighting back tears when Rushin suddenly interrupts her father, saying: “I thought it would be different in Europe, but here too they don’t want us. Here too they want to burn us.” Now her parents are crying as well. I beg them to come to stay with me, at least for the night. They’re afraid they won’t be registered, but I assure them the State Office is closed over the weekend and that I will bring them back to it on Monday. All of a sudden dark clouds appear and it starts getting windy. Mohamed looks at his wife.

This article has been shortened, click on the link below to read the rest on Buzz Feed.

BuzzFeed News: This Is What Happened When I Welcomed A Refugee Family Into My Home

1 Comment on Berlin: Joy Of Welcoming Refugee Family Into Their Home