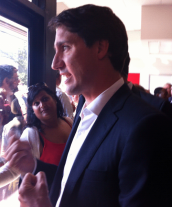 Justin Trudeau speaking to crowd of supporters in Esquimalt, BC, Canada. (Photo by Bertram J. Kirkpatrick 08/20/2015).

British Columbia, Canada: Yesterday I attended the political speech of Justin Trudeau at the Esquimalt constituent office of the Liberal candidate David Werner.

It was a sunny day, a lot of people showed up to hear Mr. Trudeau speak, so many in fact, both sides of Esquimalt Road were lined with Liberal supporters. Lots of camera’s were there, CHEK News, CTV News, and newspaper reporters gathered around the enigmatic Liberal candidate.

The podium was set up and David Anderson, the former MP was in attendance. Justin Trudeau arrived in a mini van, parked on the street front, and entered the front door, unlike the expectations of a few people. I was standing near the front door and he shook my hand as he entered the venue. He was warm and friendly, and took the time to greet everyone who wanted to say hello.

Mr. Trudeau took the podium and began to talk about some of his platform. He spoke of the need to enable Canadians to look after their elderly and disabled loved ones. He elucidated about the need to divest the tax breaks of the 1% in order to enable the middle class. It was a pleasure to hear Justin speak in both official languages of Canada.

Justin Trudeau outside the Liberal Contingency office in Esquimalt, BC, Canada. (Photo by Bertram J. Kirkpatrick 08/20/2015).

He spoke about marijuana laws, he seemed aware that it is an important issue for residents of BC, as it has already created local jobs which boosts our economy. Mr. Trudeau suggested it was time to drop the draconian laws of the Harper Government, that put money into the hands of organized crime, and enact legislation that was in line with modern principles, experience and research, while keeping it away from children.

He spoke often, of the need for inclusion and diversity. The message was not lost on the crowd of listeners. I spoke with several contemporaries, grandfathers, and granddaughters, they all agreed it was time for a Canadian Government that cared what we thought.

Not one person in the crowd appeared disappointed, there were no protesters, and Justin took questions from the media after his speech. Mr. Trudeau then made the rounds through his large group of supporters, and even took pictures with everyone that asked. 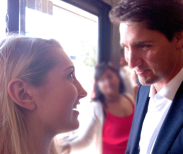 Justin Trudeau speaking to the youth shows respect, and equality for all Canadian, Esquimalt, BC, Canada. (Photo by Bertram J. Kirkpatrick 08/20/2015).

On the way out he stopped, again, to shake my hand, smiled warmly and sincerely, and waited while I said it was a pleasure to meet him. After walking up and down both sides of Esquimalt Road to greet all the exterior attendees he boarded the mini van, much to the relief of the security detail that escorted him through the visit.

To his security staff’s credit, not one cross word, nor push, or shove occurred during the entire event. I was proud of their Canadian deportment, and the way they were able to perform their duty with civility and professionalism, without so much as an unhappy look.

It has been far too long since I was proud to be a Canadian, but meeting Justin Trudeau changed that. He really is the kind of person who should be Prime Minister of Canada. I know he earned my vote.

Bertram can be contacted here: Bertram J. Kirkpatrick on Tumbler